In New York City today during a Mercury Hour, from 10:07 am edt until 10:52 am edt, President Obama addressed the General Assembly of the United Nations. The president's Lunar Return to 3Gem21 occurred at 10:09 am edt so the separating trine with the Sun and the separating square from Neptune affect his natal Moon as well as today's Moon. The ongoing Neptune square to natal Moon denotes a difficult time for establishing steadfast alliances, and as you know, the entire world of nations is said to be angry at US spying on governments and world leaders via the NSA. Neptune is associated with spying just as is master spy Pluto.

At 10:07 am edt (NYC), 10Sco26 was rising along with authoritative Saturn @9Sco19, North Node of public contact @8Sco14, and orating Mercury @23Lib25, a degree that conjoins Arcturus (taking a different approach) and Spica (a potential for brilliance, but also The Spike.)

Venus @15Sco15, the Eagle Point, was on the rise as well--in company with transiting asteroid Toro (power, including nuclear) but with Mars as the chart and speech ruler (along with Pluto @8Cap59 as sub-ruler) at Midheaven--MC, The Goal), we find that American militarism was certainly on display for the world to see. Need an example? "The United States is prepared to use force in the region," President Obama asserted. As if anyone doubted it.

Plus, in a curious synchronicity, asteroid Atlantis ('America', but also 'where we feel doomed' and 'abuse of power') conjoins Mars and MC at 10:07 am edt. The MC degree of 18Leo53 puts the 'Mother of All Eclipses' that Nostradamus touted centuries ago smack dab at MC and is in the same Saros series (1 North) as the Pre-Natal Eclipse of the UN! The UN's PE manifestation @16Can57 is marked in the 4th house of this natal chart and today its degree is triggered by tr Jupiter @17Can34 in 9th house, thus expanding or increasing 1N's influence on current events.

1N themes include 'unexpected events put pressure on relationships or groups; issues loom large but it's unwise to make decisions because information is distorted and possibly false' (paraphrasing Brady's Predictive Astrology). This eclipse last occurred on August 11, 1999 and ushered in the New Millennium of terrorism used to control populations, not the least of whom is the American public. 1N's next manifestation will be on August 21, 2017 @29Leo, which conjoins Royal Star Regulus, which, btw, is at MC (00Vir31--Regulus has precessed to 00Vir+) when President Obama finished speaking today at 10:52 am. Undermining Neptune (The Masses; The Media) @3Pis13 Rx conjoined the IC (Foundation; Endings) of the speech's chart.

To my cynical ears, it seemed the president hinted at more violent terror attacks being perpetrated for global government types will do anything to fulfill their long term goal. And many Americans now admit--however reluctantly--that false flag ops have been used by our government to emotionally inspire us to march into ill-advised wars.

And yet, diplomatic Venus was on hand this morning to 'sugar coat the message' as much as possible yet her jealous and vengeful nature is visible quite clearly whenever the planet is posited in vengeful, spying Scorpio--ruled by the forceful duo of Mars-Pluto. Scorpio is the sign where another Solar Eclipse will manifest on November 3, 2013 @11Sco15. Around that time and after, there is potential for more hidden meanings and inconvenient secrets to be unveiled and if you click to view the eclipse horoscope set for Washington DC, you'll see that warrior Mars @11Vir11 is at MC, a militaristic echo of today's UN Address. The November 3, 2013 eclipse will conjoin the Ascendant of today's speech chart--the speech itself--but with its Sabian Symbol as a possible saving grace: '11Sco' = "A Drowning Man Rescued." (Jones.)

Now for future reference and for those who may not already have this chart in their astro-files, below is the natal horoscope of the United Nations which was officially set up in Washington DC on October 24, 1945 at 4:45 pm est when the 'US Secretary of State signed a protocol of deposit of ratification' (Campion). The organization, a prototype of the 'new world order' sports the stop-go energy of a Mars-Saturn conjunction in 4th house, an excitable Moon-Uranus conjunction with the Moon conjoining US natal Mars in Gemini, and a goddess worhiping Venus-Neptune conjunction in Libra which reveals the involvement of the Vatican in its formation. Enlarge to read a few basic notes concerning the UN where you'll see that today's Neptune (at 12th cusp) and Pluto (at MC) are penned outside the chart along with a few US natal placements...such as our natal Chiron rising: 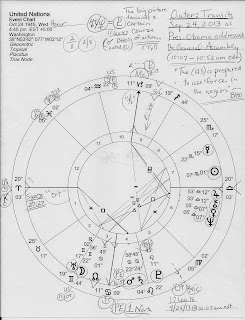 For me, the most telling midpoint picture of the UN natal chart is penned on for Uranus and Neptune, the Enlightenment planets, form a word picture with Pluto in Leo...Uranus-Neptune = Pluto: 'the big picture demands a certain course of action which must be followed, there is very little option to do otherwise' (Tyl)--the 'big picture'? A totalitarian agenda which we're now seeing implemented before our very eyes as the US war machine marches across the globe and the West challenges the East for global dominance. The ancient fight continues between Abraham's sons...

Please note that in my haste, I neglected to add to the chart that it's a Mars Hour, and that Pluto is apex planet of a second midpoint picture (Venus-Uranus = Pluto) which adds vibes of notoriety, fated unions, and exhibitionism to the character of the UN.