Is there a natal chart for the 'New World Order'?

Meant to replace the Bretton Woods Agreement, and often referred to as a 'New World Order' (aka, global government), a modern-day natal horoscope may be set up for (imho) the third of the Great Conjunctions of Enlightenment planets, Uranus and Neptune, which conjoined three times through 1993 around the 18th degree of Saturn-ruled Capricorn: 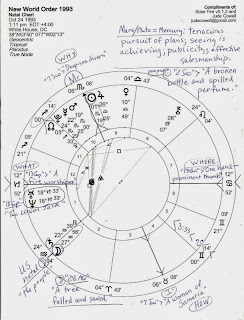 In Sabian Symbols, '18 Cap' = POLITICAL POWER, the negative expression of which (for that is what we are already experiencing) is: 'smug or strong-armed paternalism' (Jones.)

And of course, the turning of US natal Mars in Gemini by progression (Rx as of Summer 2006--the neocons broke our military, a condition that is ongoing with President Obama at the helm) has aided the international cabal of intellectual elites and bankers who call the shots from behind the scenes and use America as their military arm to enforce...a draconian new world order--including, as we see more and more often--on US soil via police forces.

As you've noted, 1993 implicates President Bill Clinton in the charade which used 'NAFTA' as a ruse to financially unite a large part of the world as does the EU and the upcoming Trans-Pacific Trade Pact which will make national sovereignty a thing of the past. So now the slogan is, 'Lean Forward, America'? Into more job losses!