A few thoughts on our modern Tower of Babel 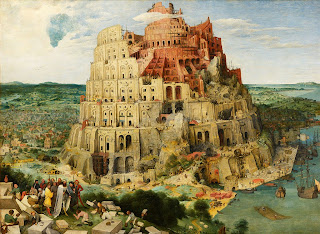 Lower left, in the white robe is Nimrod, the king who reputedly ordered the construction of the Tower of Babel and whose wife/consort Semiramis is the feminine archetype--the Whore of Babylon--an ancient and modern symbol now modeled via such 'goddesses' as Venus, Inanna, Ceres, Diana, Vesta, Lady Liberty (holding the Illuminati torch in NY Harbor, sent from French Freemasons to American Freemasons), Mary (according to the graven-image-worshiping Vatican), Lilith, and more.

Then there are the corporate-owned pop stars and actresses who constantly bring the Semiramis archetype into modern awareness...or, perhaps I should say, unawareness, since few seem to care about the underlying symbol they're actually paying homage to as long as there are concert tickets and new tunes to purchase.

Now for several decades and especially since 2010, we have been induced to believe that "corporations are people" and yet most people see this falsehood as the monstrous lie it is. This blogger prefers to see corporations as a continuance of the corporate Tower of Babel project for Nimrod and the rest of the over-reaching people of his day thought they could 'reach heaven' and take God's place and usurp His authority by way of building a tower up to the sky.

And of course, the Twin Towers were sabotaged on September 11, 2001 by those who disagree with America's leadership as the 'New World Order' agenda is set more fully in place. Corporations, especially banking institutions, in their skyscrapers are now said to be 'too big to fail' and I suspect Nimrod and his stonemasons felt the same way about their Tower of Babel, that prototype of corporate structure ever since. And it seems that aid for, planning of, and/or collusion with the 9/11 attackers came from within the US (though this post is not about that 'official story'.)

Now you may disagree with my conclusions as much as you like, but I'm typing them anyway. Calling a chicken a duck doesn't make it quack. Calling corporations "people" is an exercise in and excuse for fraud, larceny, and corruption. The power elite fool no one but continue pretending that they do as they seek to take over control of the world.

It's tragic actually, their Nimrodian delusion fueled by irrational and stubborn will. Delusional because they only have this world in which to set up an earthly 'kingdom' and in their brashness they will never Be like the Most High--no matter how high the fabled corporate ladder or tower extends.

Note: This topic was inspired by the calendar: April 5, 2015 is Easter Sunday and yours truly will be celebrating because He Is Risen!