Confession: lately I've been privately and not-so-privately giving captions to Ted Cruz photos based on his variety of expressions during photo ops and simply could not resist adding this one to SO'W--what I call his "I'm So Adorable" look (in his own mind): 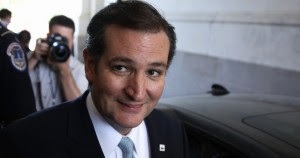 And here's the article via Ring Of Fire Radio that goes with the photo: Economists' Report In: Ted Cruz's Tax Plan Is Laughable though I doubt that 99% of us would be laughing if Cruz obtained enough power to implement his anti-society, anti-government ideas to shrink, drown, and collapse the US government.

Now have you seen this pitiful expression on the mug of thespian Cruz? This one I felt compelled on Twitter to label "sadness" for obvious reasons.

And We Must Never Forget Cruz's immortal rendering of Green Eggs and Ham for which US taxpayers paid millions of dollars while the big faker turned the US Senate into a laughing stock across the globe.

So tell me, Can Astrology Describe Ted Cruz?