Will the May 21, 2016 Full Moon activate or fulfill Sequestration Cuts?

On May 21, 2016 a Full Moon perfects at 1Sag36 within orb of the Sequestration Eclipse of November 25, 2011 (2Sag36). Since New and Full Moons can act in similar fashion to eclipses (disruptive 'wild cards') if they are prominent or powerful enough, I'm suggesting that the May 21st Full Moon occurring so near the November 2011 Eclipse degree could activate, trigger, stimulate, culminate, or fulfill events concerning the 2011 Solar Eclipse, a New Moon, which fell in the 14 North Saros Series with its themes of 'peculiar turns of events, unexpected financial happenings, despair, confusion, a draining of energy, too much confusion to make clear judgments' (Brady).

And since Eclipses often uncover secrets or previously hidden facts, inconvenient revelations concerning sequestration and/or the related actions of Congress could occur in the rays of May's Full Moon as the seamy underbelly of our Capitol Hill Political Theater is exposed to the light.

Now in September 2015 The Hill headlined Sequestration becomes 2016 buzzword for Republicans then trudging along on the Campaign 2016 trail--though the buzz seems to have bumbled out as the campaign now focuses on its presumptive nominee, Mr. Trump. Back then, Donald Trump is quoted on the topic of ending sequestration saying that "more cuts are needed" yet if we ask him tomorrow, his off-the-cuff gut reaction on the subject may be completely different.

The con man/businessman has stated that he doesn't want to cut "entitlement" programs like Social Security even though the predictable Republican Party line is to end deep budget cuts via sequestration for the military while keeping them in place for domestic programs. Perhaps this result was their goal in November 2011 when the US Congress abandoned its fiscal duties and allowed 'sequestration' to be put in place like a time bomb of austerity aimed at the American people, a catastrophe Republicans have longed for since the social safety net days of Franklin Roosevelt and the New Deal. And nowadays, the GOP has managed to convince almost half the American people that they are not a party of reactionary monarchists waging class warfare against We the People in spite of all evidence to the contrary!

Then, in March 2016 Defense News promoted a warning to 'lawmakers' (represented by Saturn: 2011 Saturn rising with Arcturus, Spica, and Cupido (Corporatism; The Syndicate) in the 2016 chart and in 2016, you see Saturn conjoining 2011's North Node, as further noted below) that Sequestration Budget Cuts Pose 'Greatest Risk' to DoD. Fear mongering, a reliable tactic, yes?

Now none of this is necessarily an either/or proposition but since all Full Moons are the culmination or fulfillment stage of a preceding New Moon (which can be a Solar Eclipse, a new cycle of activity) perhaps May 2016 will bring the word sequestration into the 24-hour news cycle more prominently as all or some of its provisions are either ended, defended, or continued. Another possibility is that the social safety net cuts that Republicans have always wanted will finally be realized thanks to sequestration--in a flurry of Full Moon fulfillment--while the already obscenely overblown military budget of The Empire will be protected and the warmongering stock portfolios of politicians will continue to fatten. Of course, any of the 2011 eclipse's despair vibes that may be activated will not ruffle the fine feathers of win-win power elites.

If you're curious, here are both the November 25, 2011 and May 21, 2016 horoscopes set for Washington DC and embedded for your consideration: 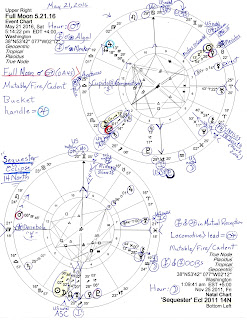 Enlarge the image for a few basic chart details. In 2011, Mars was leading the entire troupe of actors while disruptive Uranus conjoined a prominent World Point @00Aries (Utopians and zealous fanatics). But in 2016, financier Jupiter is in the spotlight as handle of a Bucket pattern. And as you see, 2016 Saturn @14Sag01 in 2nd house of the National Treasury conjoins the 2011 North Node hinting at serious meetings--more of them (Saturn Rx), probably with an air of austerity attached. Also in 2nd house is the Full Moon attended closely by activist Mars, the warrior planet, conjunct the Full Moon degree.

Opposite, the Sun @1Gem13 in the corporate 8th house of Debt, Credit, and Insurance (Obamacare?) will be conjoined by one of the money planets, Venus in her own sign of Taurus, conjunct one of the stars of the Pleiades constellation, enraged Algol. Apparently, someone is furious and it may be a lady--my guess? Yellen, Clinton, or both. Of course, this could also be a cosmic shout-out to militants of the Isis persuasion and the threatening sequestration cuts that will cramp the Pentagon's style in fighting them. Plus, with China, Russia, North Korea, and others building up their weapons and military forces, the American Empire must keep up with the Great Chess Game.

Yet in a logical world, you'd think that the US Congress in 2011 must have suspected such questionable outcomes, wouldn't you? In 2015 they improved the military budget but will that provide enough billions to pay private contractors and the rest?

Be that as it may, Guns and Butter is a very tiresome stalemate to have to deal with all over again, thanks to US politicians behaving in breach of the public contract by not doing their jobs--and when they do their jobs, they do them as badly as possible down to the lowest common denominator, credit downgrades and all. Guess you can see political faithlessness in the 2011 Eclipse chart via fixed star Denebola rising with its key phrase: to go against society. Look to the goal-oriented Why? Point of the 2011 chart (MC) and you see US natal Mars in Gemini, our military fighting multiple wars at once. And in the May 2016 chart, there is US Progressed Pluto at critical degree (29Cap) at the IC (also at 29Cap, the How? Point), the plutocratic Foundation of the Matter.

As for Guns and Butter, one of the clearest expressions of the paradox that I know of is Dwight Eisenhower's famous Chance for Peace speech delivered on April 16, 1953 to the American Society of Newspaper Editors--back when a Republican president seems to have retained a conscience as he bounced from war to White House. To quote:

"Every gun that is made, every warship launched, every rocket fired signifies, in the final sense, a theft from those who hunger and are not fed, those who are cold and are not clothed. This world in arms is not spending money alone. It is spending the sweat of its laborers, the genius of its scientists, the hopes of its children.

The cost of one modern heavy bomber is this: a modern brick school in more than 30 cities. It is two electric power plants, each serving a town of 60,000 population. It is two fine, fully equipped hospitals. It is some fifty miles of concrete pavement. We pay for a single fighter plane with a half million bushels of wheat. We pay for a single destroyer with new homes that could have housed more than 8,000 people.

This is, I repeat, the best way of life to be found on the road the world has been taking. This is not a way of life at all, in any true sense. Under the cloud of threatening war, it is humanity hanging from a cross of iron...

Is there no other way the world may live?"

If you know a modern politician, a 2016 candidate perhaps, who's up to the task of giving an honest and life-affirming answer to such a question, please vote for him on November 8, 2016.