Shadow into Light: an Esoteric Department of Justice

Various dates and events are noted upon the Wikipedia page of the Department of Justice along with the name of President Franklin D. Roosevelt but unsurprisingly I find no mention of FDR's attendance at the Masonic ceremony on October 25, 1934 to dedicate the DoJ building at 3:00 pm (The Secret Architecture of Our Nation's Capital, pp. 291/92, paperback, Ovason). Obviously '3:00 pm' was an elected hour for occult purposes.

Across the District of Columbia, esoteric symbols are styled into the city's architecture including the DoJ building via a panel designed by the sculptor C. Paul Jennewein and installed in 1935 on the Constitution Avenue side of the building. Mr. Ovason describes the panel's symbolism as "a rarity in Washington DC, for it was designed to make a hermetic use of sunlight in the slow build up toward an esoteric meaning. Given the context, this symbolism equates the sunlight with the light of justice, and deepens that significance of the Latin above the figures, Lege atque Ordine Omnia Fiunt: "All things are created by Law and Order."

(Image: {Public domain or CCO} by Daderot (own work), via Wikimedia Commons)

Ovason continues, "Since the facade (and hence the panel) is oriented on the east-west line, the morning sun falls upon the figures fairly evenly, picking them out dramatically, as the relief is highlighted above the shadows. However, the panel has been inset in such a way that, until the whole relief is lighted, a shadow remains over the stick in the hand of the nude figure to the extreme right. As the Sun moves higher up the skies, the hand of the man is eventually picked out. The sunlight then slides slowly down the stick in his hand until the bottom symbol is revealed by its rays. This last penetration of light reveals the intent of the symbolism -- a serpent, coiled in the bottom-right corner. Such a light-darkness symbolism was widely used in Egyptian architectural devices."

So what of the nude man, his staff, and the darkened snake? Officially the symbol of the man is said to represent Order and the snake suggests the ancient "Snake of Wisdom." And of course, healing and rebirth as symbolized by two entwined snakes on the staff of the Caduceus come to mind along with that symbol's Mercurial connection and its resemblance to DNA. But wait! The snake on the DoJ panel is not wrapped around the staff as seen in arcane and religious imagery. On the DoJ building the single snake is quite different for the man is standing on the snake and his staff or stick is actually a spear. It is a triumphant symbol showing victory over man's lower nature as he aims for higher spiritual growth within the basic Masonic theme of redemption.

Tragically, this denotes another way in which America has lost her direction because for too long, US justice, as is usually meted out in our two-tiered system, tends most often to inspire the repetition of criminal acts rather than leading to redemption but this is well known and understandably lamented by the populace--and is a tragedy beyond the scope of this post. It is my thought that once a nation's legal system is corrupted beyond repair, that nation is plummeting down into history's dust bin of oblivion.

As for the abundant use of celestial Virgo symbolism across the city, the Department of Justice building displays The Maiden and wheat symbols on its two large aluminum doors below the above pictured panel. The doors were also designed by C.P. Jennewein and depict lions as well which denotes the Zodiacal progression of the 5th sign Sun-ruled Leo into the 6th sign of Mercury-ruled Virgo, The Maiden, or archetypal goddess so often depicted with shafts of wheat or corn in her hand.

Mr. Ovason explains that "The idea that from the bestial realm of animality (Leo) may grow the life-giving corn, with all the Christian implications of the pelanos, or sacred bread, is a profound reflection on the inner propensity of Virgo for order and perfection. The redemptive theme is also expressed in the spear in the hand of the man above, the bottom part of which transfixes the serpent. Just as this portal imagery associates the snake with the lower lion, so it associates the growing wheat with the hand of man, by which he remains creative in the world. {} Just as the snake remains in darkness to the last, so the hand of man is first picked out by the light of the Sun...The snake is the dark inner serpent which must be overcome to free the inner light."

Categorizing Virgo must have order, yes. "All things are created by law and order." In astrological symbolism, law is one of the provinces of Saturn, ruler of Capricorn, the sign of law, government, and business. And where does Virgo lead? To Libra, sign of the Scales of Justice, and this is available in America--if you have money to pay for it.

So, without further fussing on my part, here is the DoJ horoscope set for October 25, 1934 at the astrologically elected hour of 3:00 pm est, Washington DC with its out-of-bounds Moon which suggests that We the People were 'out of the loop' or somehow detached from the event (or unaware of it). Mars and disguising Neptune are in celestial Virgo while transit Pluto powerfully challenges US natal Pluto by opposition, and the recent Jupiter Direct station @13Virgo was performed upon 1934's Neptune and may be at least partially descriptive of current mutual lawsuits between Washington and NC and the overblown reactions involved on both sides to what is close to being a non-issue of social wedge proportions.

Please enlarge the image if you wish to read the astro-notes squished upon the chart: 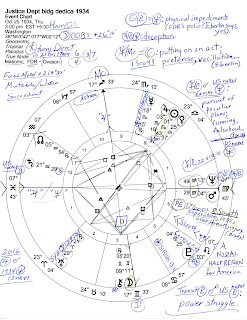