Below is the Spring Equinox 2017 horoscope set for Washington DC (in its role as representative for all of America). As you see, the February 26, 2017 Solar Eclipse @8Pis12 is rising and you'll find a link to my notes concerning this eclipse and the August 21, 2017 eclipse ('The Great American Eclipse') at the end of this post: 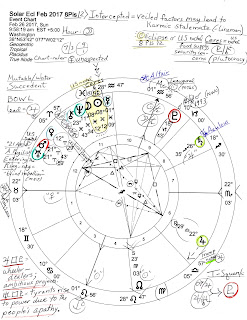 edit: Plus, as you see, the February 26, 2017 Solar Eclipse (Spring EQ 2017's Prenatal Eclipse, or PE) @8Pis12 also rises and suggests that its 19 South themes will be affecting the Spring season agenda. Its themes are 'a pleasant surprise; a joyful event, sudden happiness, a lucky break or win, positive changes' (Brady). That's awfully good for a South Node eclipse which tends to indicate a draining of energies but I'll patiently wait all Spring for our ship to come in on Piscean seas, won't you?

We The People React

Then in 10th house we find a very close conjunction of Moon (We The People) and restrictive, depressive, austere Saturn @27Sagittarius, planet of laws and lawmakers. 'Overambitious pretensions' (27Sag) may be in evidence though strategy, ambition, and a sense of direction are positive potentials of Moon-Saturn contacts. Obviously, extreme apprehension (Saturn) affects the public (Moon) concerning the experiences that are coming up as Spring 2017 unfolds.

Also of concern is testy Mars @7Tau28 in 2nd house of the National Treasury. At the Goal Point (Midheaven, aka, MC) is 19Sag13 with moneybags Jupiter ruling there as well. Plus, Jupiter again leads a Locomotive of all the planets in his role as CEO and roughshod executive in a power position ('full steam ahead') leading onward toward fulfilling objectives which have been desired in some quarters since FDR's New Deal programs were instituted. Mr. Trump is simply the latest 'face' upon the austerity monster.

Social and political stability in 2017 are lacking in this horoscope as might be imagined with enemies of our social safety net now in charge of House and Senate and with their mouthpiece-of-sorts (the tweeter-in-chief) and Mr. Pence in control of the White House helm thanks to the Electoral College who overrode the popular vote in November 2016. Here we have another president with No Mandate from The Governed yet he'll act, talk, and tweet as if he's following 'the will of the people'! Yet in this chart the themes of the rising Solar Eclipse are positive and I'd prefer to hold positive expectations for the presidency of Mr. Trump but I think we all know what sort of things to expect instead from his highly suspicious anti-government/anti-New-Deal Cabinet choices and the overly Republican Congress, the 115th.

The 7th house Syzygy Moon (last lunation), a Full Moon @22Vir13, perfects on March 12th conjunct US natal Neptune, a further example of the instability in our society and current fraudulent political conditions in the US. Of course, Neptune also rules the masses, propaganda, poisons, and the media, most of whom colluded with the political class and their shared financial backers during the 2016 Campaign in order to produce such a 'president' to mislead our nation which will be dismantled along with the social safety net the elderly, ill, and weak depend upon. Survival-of-the-fittest guru Ayn Rand didn't believe in coddling the weak, you know (though she herself applied for and received social safety net benefits in her old age, the hypocrite). Apparently, age rendered her a "useless eater" too but don't tell Paul Ryan and his GOP cohorts (and the duplicitous Democrats who helped enable this whole scam). So it seems that the GOP depopulation program has now been officially established.

Well, today is my birthday and I'm rapidly getting a headache just looking at this horoscope and thinking about how these knaves intend to line their and Wall Street's pockets at our expense (as always but on steroids) as 2017 plods along so I'll close for now and hope to add more details to my astro-notes concerning this horoscope at a later date. As I said, social and political stability in 2017 are lacking in the Spring Equinox 2017 horoscope.

And yet we must not falter for our only hope is ourselves.