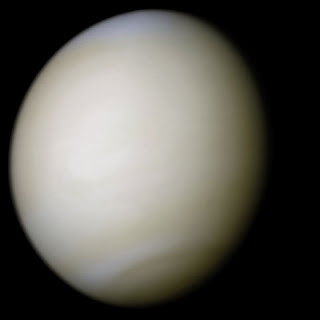 By NASA or Ricardo Nunes [Copyrighted free use or Public domain], via Wikimedia Commons

March 4, 2017 at 4:08:51 am est (Washington DC) is when transit Venus stands still @13Ari08 and, from our vantage point on planet Earth, seems to begin backward motion. Stationary planets "contain *suspended power" so let's consider what this means for the planet of diplomacy (and war, as ruler of Libra), values and evaluation, perspectives, persuasion, gain, relationships, trans- and other gender issues, and the attraction principle. The Arts, Beauty, and Romance will not be part of our political considerations today but the Venusian desire for change will.

When Lady Venus retrogrades, a process of review begins until she reaches and surpasses her 'shadow degree' which is her Rx Station degree--here, 13Ari08. During this period, her objectives may or may not run counter to tradition and societal proprieties and although current superficial social values may be rejected (Rx) by this Venus (and/or her partners?), she is in a passive state of reconsideration for now. Again, social and political protests particularly by women, will reoccur although their motivations may not 'reach' or agree with the general populace and so may fail to receive approval from everyone (though it's difficult to see how womens' rights and issues could be unapproved by the Collective at this late date!) Protesters' tactics and predictable sabotage ploys by paternalistic forces play a part in this approval-disapproval process as Venus Rx re-evaluates tactics in March into May including financial conditions, plus, there may be a weakening of partnerships or alliances, political and otherwise.

Venus Out of Shadow

Venus reaches shadow degree on May 18, 2017 @12:55:40 pm edt in a Washington DC chart with 00Vir37 on the Ascendant; therefore, Mr. Trump's natal Ascendant (29Leo55), transit North Node (28Leo44 Rx; public contact), and royal star Regulus @00Virgo (success if revenge is avoided) also rise. Transit Venus @13Ari08 is opposed by transit Jupiter @13Lib55 Rx and moneybags Jupiter is again the lead planet in a Locomotive pattern of executive power and success. But are we also seeing Jupiter the General and/or Jupiter the Religious Leader rising? More on the opposition, below.

Now in socio-political realms, Venus represents Culture, the economy and Economics, wealth, diplomacy (as noted above), society and societal trends, values (as noted), biology, the plant kingdom (now being further plundered by corporate interests), metals, and peace (now said to be brought by war). The planet's detached state indicates less moderation from other planets (actors) so that her sign and other astrological conditions are emphasized, in this case, Aries archetypes such as warriors, pioneers, adventurers, rebels, activists, business leaders, technicians, surgeons (abortion issues, repeal of Roe v Wade?) athletes, zealots, ambitious people, arsonists and the fires they set, and generally, energy, motivation, and aggression. The US justice system including the Supreme Court are in the news with America's natal Saturn (14Lib48) (courts, lawmakers) ruled by Venus.

And you may remember that it was Venus in late Sagittarius that announced "an outsider" and "rival" of the administration (then, a Democrat in the White House) who was destined to win the White House in 2016? (My pre-election political speculations are unedited in the post.)

Now we know that a Mars-ruled Venus in Aries can demonstrate a determined desire for change. What changes come depend on many more factors than Venus and Mars in Aries, including transit Pluto, saboteur and artist of transformation, now hanging out on and around the Uranus-Neptune 'new world order' degree of 18 Capricorn with its negative expression of 'smug or strong-armed paternalism'. And you know the midpoint picture now created by creepy planet of the criminal Underworld, Pluto:

Uranus-Neptune = Pluto: the big picture demands a certain course of action, very little option to do otherwise (Tyl) which to me sounds like 'an offer that can't be refused' by our sold-out, intimidated, bribed, or ideological politicians who inexplicably act against society's best interests while representing corporate interests instead of the needs of the constituents they allegedly are in Washington to represent. That Mr. Trump has been read into this 'big picture' agenda and acts in favor of it are obvious for he wouldn't be placed in the White House if he weren't. His campaign promises otherwise ring hollow as any propaganda yours truly has ever heard or read about from our nation's manipulated past.

Occurring across the Aries-Libra Self-Other axis, a Venus-Jupiter opposition is no time to mix business with pleasure though Mr. Trump seems to be incapable of understanding the difference and has no desire to avoid such political conflicts of interest or the ethics violations the mix suggests. So let us assume for the purposes of this post that the following factors apply to him in particular if to no one else (although of course they may).

Political potentials include: many new and perhaps ill-considered laws, the number of foreign capital investments increase, religious interference in our justice system expands, and foreign raids on the Treasury. Positively there may be expansion in economic forecasts though inflationary factors and/or fraud and corruption continue to lurk underneath which makes a stable basis for our economy uncertain.

Summary: on March 4th, Venus retrogrades in unaspected condition but will receive an aspect from Jupiter as she leaves her shadow on May 18, 2017, and thus gains a better or clearer perspective. That the perspective is from an executive powerhouse Jupiter (the broadcaster and promoter) in Venus-ruled Libra (with all that their opposition implies) presents more of a negative condition than is good for the common good or for the US economy. But maybe circumstances are just dandy fine for the power elite and their financial enablers.