What Do Franklin Roosevelt and Lord Byron Have in Common? 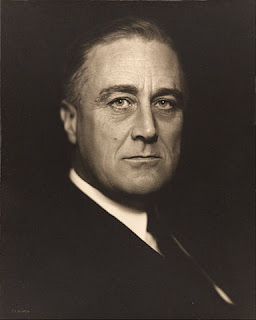 Monday March 13, 2017: for those who consult Sun-Moon personality blends of politicians and poets, the discovery of who shares a natal Sun-Moon blend with another famous person can be revealing although we may not always understand what is being revealed since sometimes the pairs who share personality blends seem more different than similar. Yet often their personalities can be perfectly described by their Sun-Moon blends. For illustration, we might refer to the shared blends of Mr. Trump and......guess who?

Now if you wish, check out the (Uranus Rising = coping ability) natal chart of Franklin D. Roosevelt and the natal chart of George Gordon Byron and you'll see that they share the Sun Aquarius-Moon Cancer personality blend of the 'humanitarian idealist'.

(Speaking of idealism, it's curious that both men's lives involved them in war efforts on the 'white hat' side, wars that were fought ostensibly for the sake of liberation. But war must always begin under a pretext, mustn't it? Otherwise, very few people would sign up to do the fighting.)

Now this misty, ethereal Air-Water combination of energies tends to possess 'a wonderful sense of humor' due in part to its cooperation between mind (AQ) and emotion (Cancer). This poetic, romantic combo has great insight and sensitivity, communication talent, and is quite theatrical. 'Conscious reflection upon the mysteries of life' is typical of this blend. Very creative, Sun AQ-Moon Cancer maintains a detached attitude toward others and is quite subjective (Cancer) when using its reasoning power.

Unconscious prejudices are likely to influence actions along with an ability to rationalize the irrational; a talent for expressing universal insights via personal images is evident (for Roosevelt through his speeches and Fireside Chats, and for Lord Byron through his romantic poetry). There is, on some level, a 'devotion to truth' embedded within both personalities (though I must wonder what Mr. Roosevelt the 33rd-degree Freemason, and member of the banking Roosevelts, did with such a devotion while serving as president).

And on that presidential note, it's time to close by typing for you the two Images for Integration for the Sun AQ-Moon Cancer blend of FDR and Lord Byron:

"A social worker bypasses bureaucracy to save a mother and child...A childhood memory becomes the basis of a new world order." (Sun Sign-Moon Sign, Charles and Suzi Harvey; my italics).

You may also wish to compare the Personality Blends of Franklin, Washington, Paine, and Jefferson, and here's a post about the day's Sun-Moon blend of Thomas Jefferson's First Inauguration in 1801. Watery!

Or why not compare the Sun-Moon blends operating during Inaugurations 1993 and 2017 of Bill Clinton and Donald Trump?

For those who don't think that 'FDR' and the label 'new world order' belong in the same sentence try this from a previous post:

In Arthur Schlesinger, Jr.'s The Coming of the New Deal (1958) he quotes Machiavelli at the front of the book saying, "There is nothing...more dangerous to handle, than to initiate a new order of things."

At the end of the book, he quotes Fabian Socialist H.G. Wells describing FDR as, "The most effective transmitting instrument possible for the coming of the new world order. He is continuously revolutionary in the new way without ever provoking a stark revolutionary crisis."

And yet in 2017 that sounds a lot like what we have now--a stark revolutionary crisis.