The US Constitution's Progressed New Moon 2018

Near the halfway point of the Trump presidential term the midterm elections in the US are scheduled for November 6, 2018. All House seats will be up for grabs and 34 of the Senate seats are to be contested as well as some state and territorial Governorships.

With current debates over whether or not the US is in a constitutional crisis created by Mr. Trump (and some say it is not, it's a political crisis) over his tweeted intimidation of FBI Director James Comey earlier this week, I noticed what to me seems an interesting if not curious synchronicity: that the Secondary Progressions (SP) of the US Constitution's foundation horoscope (September 17, 1787 4:00 pm LMT Philadelphia, PA) reveal an SP New Moon which perfects on November 5, 2018 @16Tau03 and seeds the beginning of a new cycle.

And when the 230-year-old US Constitution's 5 South Prenatal Solar Eclipse (PE) of June 15, 1787 (chart shown, below) 'progresses' to the next Saros Series, it's the 6 North which in real time manifested on December 7, 1787 (day-for-a-year). Both 5 South and 6 North have appropriate themes for cyclical events that concern the US Constitution and thus for the US government. Curiously, the Trump presidential bid announcement in 2015 is also involved:

Here is the horoscope of the US Constitution's Prenatal Solar Eclipse (PE) @24Gem20 with Mercury @23Gem09 which was the initial eclipse in the 5 South Saros Series with themes of good news, a peak experience, and benefits (Brady): 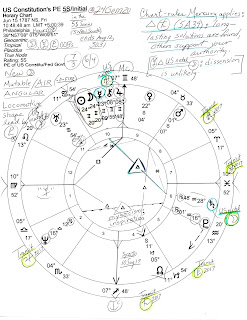 The curious nature concerns the fact that this 1787 Gemini Solar Eclipse was conjoined or stimulated on June 16, 2015 by a New Moon @25Gem07 and transit Mars (Mr. Trump's rising planet) @24Gem35. The New Moon perfected that morning as Donald Trump lowered himself down the escalator of Trump Tower to announce his bid for the presidency of the United States to a paid audience hired through an actors' employment agency ($50 per head). And perhaps you're familiar with the Sabian Symbol for '25Gemini': "A Man Trimming Palms"!

Now progressing the US Constitution's chart to May 2017 shows its current soli-lunar phase to be balsamic, a dark-of-the-moon stage of transition, a seed state turned toward the future (Rudhyar) and with a prophetic feeling of finality. If Americans now feel "possessed by a social destiny" (or, victims of our often-touted 'Manifest Destiny' as the US military drains our coffers and conquers the world) this may describe one reason for it because what would our nation be without the US Constitution? Rudderless, I should think. And coup'd by plutonic forces which have always manipulated our government from abroad (US 1776 Pluto out of bounds).

Symbolically upcoming on November 5, 2018--one day prior to the 2018 Midterm Elections--is the SP New Moon of the US Constitution. In its chart, below, you see the SP New Moon @16Tau03, the US Inaugural Ascendant (14Taurus+ = Oath of Office) conjunct the 8th cusp, and dissolving Neptune Rx and rising: 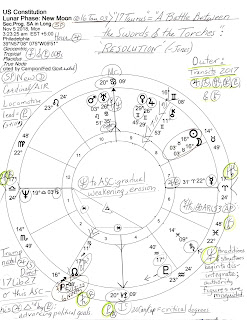 Outside the chart are penned the approximate 2017 positions of transit Jupiter through Pluto plus, Chiron (in green); please enlarge to read. As a timing device, the SP North Node @17Sag11 conjoins the 6 North 'Prenatal' Solar Eclipse with themes of: relationships to father figures, authority figures, or the need to take responsibility and control; time to accept commitments which may occur due to another person's illness or unreliability (Brady)--topics currently under discussion which concern the chaos in the Trump White House, his fitness for office, the potential for impeachment, and whether or not Trump's actions undermine the US Constitution.

US Constitution SP New Moon: '17Taurus' = "A Battle Between the Swords and the Torches" - RESOLUTION (Jones) which in my opinion relates to the longstanding battle between certain secret societies and their control of the US government. Dane Rudhyar adds: "Keynote: Refusing to depend upon the past, the seeker turns warrior, fighting anew the eternal 'Great War'...POLARIZATION OF VALUES."