Described as "an ardent American nationalist" in this informative article, dictionary titan Noah Webster invented the word 'immigration' to define those who remove to a country.

On the thorny Trump-touted topic of immigration, it's only natural that many astrologers refer to the Sabian Symbol for '23 Sagittarius':

"A Group of Immigrants As They Fulfill the Requirements of Entrance Into the New Country"..."Keynote: Consciously accepting the ways of a new stage of experience, in readiness for the opportunities it will present...TRANSITION" (Rudhyar).

To this Marc Edmund Jones adds, "Keyword: ENTRANCE...positive expression = courage in crossing new frontiers and skill in repeating or improving on prior achievement; negative expression = a surrender of the real in a pursuit of the false."

Curiously, self-identified American nationalist Donald Trump was born with his natal Moon-South-Node conjunction in Sagittarius (opposing his Sun-North-Node in Gemini) verynear this degree of "immigration"...and not forgetting that, in the Zodiac, degrees that oppose one another are Illumination Points full of unconscious material.

So given Mr. Trump's political use of America's immigration issue, let's check Jones for the Illumination Point of '23Sag' which is '23 Gemini': "Three Fledglings in a Nest High in a Tree"...ELEVATION: "positive expression: an unconditional creativity exalted to the point of complete freedom from any immediate involvement; negative expression: psychological witlessness and a false sense of release from responsibility."

Pursuing the false, witlessness, elevation of fledglings, lack of responsibility?

The first names that come to mind in 2017 are Donald Trump, daughter-in-chief Ivanka and her hubby Jared Kushner...elevated to the White House (top of the 'tree') although I'm not certain they're witless as much as agents for the destabilization of the US government for the sake and elevation of a foreign government or governments.

House of Rothschild coat of arms: 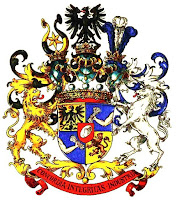