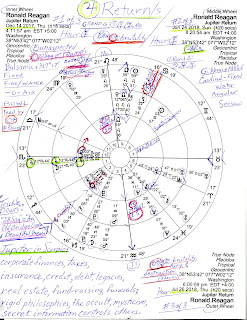 Here is a tri-wheel of the current Jupiter Return/s of former president Ronald Reagan whose natal Jupiter @13Sco44 rises in the first Return chart (ASC 13Sco23) of December 14, 2017 along with the Moon (9Sco50) and chart-ruler Mars @3Sco08. All three charts are set for Washington DC although you may want to reset them for California and study each of them separately.

The middle chart shows Jupiter in retrograde phase while the outer chart, the third of three conjunctions to natal degree, shows an interesting Sabian Symbol for the Return ASC--"28Sag": "An Old Bridge Over a Beautiful Stream" which to me relates to the stream of money that the Reagan era provided the wealthy class via 'trickle down economics', a theory that has been repeatedly shown to benefit only the wealthier classes while decimating the fortunes and budgets of the 99%. The 'stream' didn't 'trickle down' as they promised it would--and never will.

Even though he too benefited from 1980s GOP economic policies, Bush Sr called the theory, "Voo Doo Economics" when it politically suited him. And perhaps you remember that during the 1980 presidential campaign, Mr. Reagan revived the Hooverites' theory of the 1920s that corporate tax cuts create jobs which is part of the GOP's discredited scheme to steal from the less affluent classes and gift greedy billionaires.

Nowadays Mr. Trump and the GOP are attempting to sell the public the same snake oil again so my thought is that if the gullible among the American people during the Trump era once again fall for such fraudulent economic drivel, we will all pay the price because 'the third time' will not be the charm.

For more Eclipse info see Lunar and Solar Eclipses of 2018 with Themes.

Another facet of this topic is economist Paul Krugman's 2009 op-ed on Reagan Signing the Garn-St. Germain Act of 1982 which deregulated the mortgage industry.