October 5, 2017: On this day Donald Trump's Secondary Progressions show his SP Moon @5Leo45 at apex of a difficult SP midpoint pair of Saturn and Pluto which denotes potentials for cold feelings, renunciation, giving up giving (Tyl); inconsistencies in work, achievements, and/or records (Munkasey).

As of April 12, 2016, Donald Trump entered the Balsamic Lunar Phase (endings, partings, and heralding a 'Dark of the Moon' phase prior to the SP New Moon), an astrological indicator which did not bode well for a man beginning an important job such as playing POTUS--but he and we are all in it now.

Below is a dual image of the April 12, 2016 Balsamic Phase chart along with Trump's SP New Moon which perfects on September 16, 2019 @3Vir00. As you see, his SP Moon has already crossed an Angle of Prominence, the Midheaven (MC), hit SP Saturn, and today sits between hard-hearted SP Saturn and SP Pluto.

That any astrological Moon can represent family members and/or health concerns must be kept in mind as well, plus, as you know, SP Moon is a timer for changes and/or important events particularly when chart Angles are involved as they are here.

Please enlarge the image to read my chart notes which include implications of two midpoint pairs involving chart Angles and one midpoint picture: Neptune-NN (lack of community spirit - Ebertin) = Pluto (power or power-mad, manipulation, control, the urge to influence the masses - Pluto in Leo: rule by force). The two Planets-to-Angles are: Jupiter conjunct Ascendant, and, perhaps most important to issues of US authority, responsibility, and accountability (which Trump always seems to dodge, at least in his own mind), Saturn crossing MC, often a mark of an important personality (Ebertin) but may also denote a potential for hard-to-meet goals (Munkasey).

Brief notes on Jupiter-ASC and Saturn-MC are listed lower left and upper right: 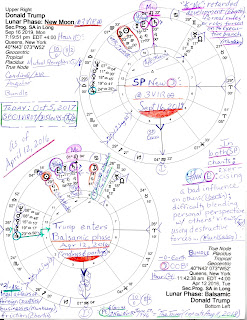 Of course, an additional look at planetary transits for these dates would be informative and I hope perhaps a reader or two will check it out especially since my recovery from surgery in August is ongoing so blogging time is briefer than I would prefer! jc