Here is a horoscope set for 11:59:59 pm est at the Capitol Building which may go into effect at midnight on December 8, 2017 when the US Government in Washington DC allows itself to 'run out of money'. As you see, Mercury, planet of deals, negotiations, votes and tricks, is retrograde (4th house) after its recent conjunction with the karmic planet of systems,structures, and lawmaking, Saturn. Both Mercury and Saturn conjoin significant fixed stars and there are other stars active in the chart including Denebola rising (with US natal Neptune in Virgo in tow) and royal Rigel at Midheaven with Donald Trump's natal Uranus, his quirky guiding planet (because Uranus is oriental in his natal chart and whimsically leads the rest of his planets).

Of course, the Midheaven (MC) is the Point of Aspirations and Goals and is the WHY? Point of any chart. And you remember that in May Trump tweeted that the US Government "needs a good shutdown" in September 2017 when Congress was supposed to be debating the budget. Instead it's happening this week though 'debate' may be too strong a word for these jokers. 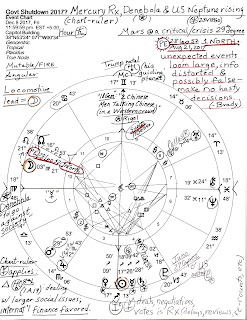 Testosterone-driven Mars is at a critical-crisis 29th degree of balancing Libra in the 2nd house of the National Treasury along with banker Jupiter in Big Business Scorpio. Opposite in the corporate 8th house of Debt, Credit, and Other People's Money is disruptive Uranus @24Ari49 conjoined with ethics asteroid Pallas, both Rx.

This December 8, 2017 chart is set for 11:59:59 pm est and it's a serious Saturn Hour. The retrograde chart-ruler Mercury applies once--to a trine with disruptive Uranus (1A19) indicating 'how things will proceed'...'dealing with larger social issues' and 'international finance favored' (as listed on the chart, lower left). Yes, Washington DC put the US under the influence and control of international bankers giving Huge Loans to Government decades ago--and karma will not be denied--what was sown will be reaped. Perhaps this is where Trump's Uranus at MC comes in with its Sabian Symbol:

Plus, who can forget that, in his own words, Donald Trump Is Really Really Proud to Be 'the King of Debt'!

Well, I've never liked spending very much time blogging about a horoscope of an event that may not even happen so if you wish more astro-notes on the topic, set up the chart or enlarge the above image to read some basic chart factors which include the current 1 North Solar Eclipse of August 21, 2017, the 'Great American Eclipse' with its themes listed, upper right, for as you know, there is a huge amount of 'distortion' being carried on and purposefully used as a political ploy against the American People.