Astrological Atlantis and the Abuse of Power 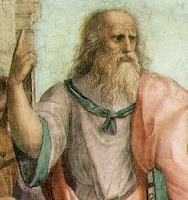 Image: Plato by Raphael [Public domain], via Wikimedia Commons; he who first mentioned the fabled Atlantis

In 2008, expert astrologer Eric Francis wrote quite extensively on asteroid and archetype Atlantis which is used in Astrology to signify abuse or misuse of power, and where we feel doomed. This relates to our collective anxiety over the fall of civilization, says Francis. The degradation of society continues apace, as we see each day in 'the news' with its 24/7 cycle which actually promotes the lowering of moral standards, and in the entertainment industry that profits from our degradation.

So in light of the implications of Atlantis, it's of interest to me (if not to you!) to discover the zodiacal positions of Atlantis in the natal charts of Men in the News because of their personal abuses and misuses of the power they hold, men such as Donald Trump and Alabama's Roy Moore. However, the list of miscreants grows longer each day especially since expansive Jupiter entered Mars-Pluto ruled Scorpio (October 2017), sign of sex, obsession, and control, so today's list includes a few other names for your consideration.

Now these serial abusers of girls and/or women cannot help when they were born and the position of asteroid Atlantis in their natal charts but they can help their attitudes and how they behave toward other people including girls and women, 'the weaker sex'. My advice to them all would be to 'throw away your bathrobes and keep your pants zipped' and this would be a major improvement for girls and women everywhere (and would result in fewer abortions as well). Of course, a peek at natal Atlantis is only a small if revealing part of any picture of abuse fior other chart factors are involved as well.

Now in the interest of non-partisanship (and because there are multiple abusers in both political parties and industries--almost exclusively men) let's include here Atlantis positions for Bill and Hillary Clinton, former broadcaster Charlie Rose (whose very surname conjures Venusian images), Senator Al Franken, and Texas Rep. Joe Barton.

Natal Atlantis of The Powerful: Hubris and Greed Doomed the Mythical 'Atlanteans'

Roy Moore: 12Lib17 Rx Atlantis sextile natal Pluto (opportunities to abuse power via his powerful position as District Attorney and Alabama Chief Justice?); today's position of asteroid Atlantis is 6Lib17 so Moore will 'enjoy' an Atlantis Return on December 15, 2017--three days after Alabama's Special Election (Dec 12th) for the Sessions-vacated seat in the US Senate. Come on, Alabama voters!

Charlie Rose: 25Pis34--secretive, romantic Pisces; Mr. Rose was born under an obsessive-compulsive romance-addled Venus-Pluto quindecile aspect indicating one who is 'driven by powerful sexual needs' (R. Reeves); "Crusty Paw" the ladies called him for his unsolicited neck rubs. So gross.

Bill Clinton: 28Leo58--as you see, his Atlantis was precisely 'eclipsed' by the 1 North Solar Eclipse of August 21, 2017 @28Leo52 which also 'eclipsed' with a cosmic blink at Trump's natal Ascendant (his nibs himself); eclipses tend to uncover secrets and scandals so it's no wonder Bill Clinton's name keeps popping up within the public discourse for his sexual escapades in the White House and beyond; during the August 21, 2017 Eclipse, transit Atlantis was @4Virgo, sign of The Virgin.

Hillary Clinton: 12Sco39 conjunct her natal Chiron, the Wounded Healer. There's a lot here to 'unpack', as they like to say in DC, but Hillary's troubles are beyond the scope of this Atlantean post. Plus, she isn't male and isn't in power at the moment (that we know of).

Al Franken: 13Sag54 Rx: no aspects to Atlantis pop out but a powerful 10th house Pluto @17Leo31 closely conjoins natal Midheaven (16Leo01) which may indicate that sex and power issues may be at the center of a plutonic 'fall from grace' in his career as I believe it has although Senator Franken continues to state that he will not resign from the US Senate. We'll see. It was a 'joke' photo after all though I totally agree that The Kiss was super gross.

To each his own, right?

And considering the current attempted rise of neo-nazism in America (well-supported by a Trump White House), how weird is it that the legend of a mythical Atlantis actually links to the myth of The Aryans?