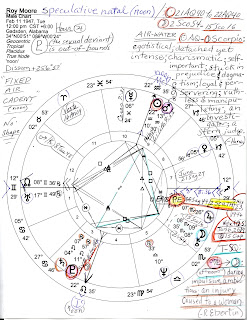 Image: A speculative ('noon') horoscope of Judge Roy Moore of Alabama, born Roy Stewart Moore in Gadsen, AL on February 11, 1947 (after Trump's June 14, 1946) with Sun in Aquarius and Moon in Scorpio, a steamy Air-Water combination of energies.

As you see, this chart is set for noon because we don't actually know the sign or degree of his natal Ascendant without an accurate birth time. At noon, North Node @8Gem36 rises (conjunct Mr. Trump's Prenatal Solar Eclipse degree which conjoins US natal Uranus @8Gem55) as does Moore's quirky maverick Uranus Rx @17Gem49. No matter where The Witness planet of revolution and independence is in his chart, Moore's natal Uranus and that of Mr. Trump are positioned in the same degree of the same sign. A difference between the two Uranians is that Trump's is his guiding oriental planet while Moore's oriental planet is Mars @13AQ30--conjunct asteroid Pallas ('the daughter') and Lilith ('the fallen woman'), with both representing feminine archetypes that are strong in the Judge's life due to their contact with a very intense Mars (made more so in its oriental condition).

When Mars is oriental (last to rise before the Sun), we see an individual for whom self-promotion is constant and with a sense of always being ';on the stump' or beating a drum (Tyl); Mars oriental is shared natally by P.T. Barnum, Evel Knievel, and Liberace. Mars in Aquarius can be unreliable, contradictory, and superficial. Yes, his is a very busy Mars--oriental, one side of a T-Square (Mars opposite Pluto = Moon: an injury caused to a woman, according to Ebertin (see lower right of chart), plus, Mars is also is the tail of a Kite pattern with Neptune and North Node sextiling stealthy wealthy Pluto @11Leo57 Rx. A Kite suggests high-flying success and, for Moore, publicity (Moon-NN)--or perhaps I should type, notoriety.

Now if you enlarge the horoscope you can probably read (upper right) a few details concerning his Sun SQ-Moon Scorpio personality blend with "stern judge" part of the picture. Sexual deviant Pluto is out-of-bounds of the earthly plane and doesn't like to 'share' only manipulate and control, while Saturn Rx is fairly near Pluto Rx in royal Leo, the 'cruel duo' of planets. Actually, any contact between Mars and Pluto (ruler and co-ruler of Scorpio) can result in ruthlessness and brutality, and Saturn-Pluto is always 'an extremist' combination that judges harshly.

Natal Jupiter @26Sco07 (materialistic and ruthless) will soon receive a Jupiter Return. Then there is Moore's PE @00Sag49 which conjoins his natal Eros (sex; the piercing) and is in the 2 South Saros Series which contains a theme of 'joining unusual groups and gaining a great deal from them' (Brady) which could refer to his current group membership/s (we're talking Alabama) and/or to a new group he intends to join soon--one imagines it's the US Senate.

Meanwhile, his Mars-Chiron square denotes a need to deal directly with issues of sex and aggression(Nolle) yet something tells me that Judge Moore has yet to do this and is being compelled by a variety of forces to do so now.

Here I'll stop typing at you in order to keep things brief. However, other natal chart factors are worthy of attention, of course, so you may want to get started immediately! jc