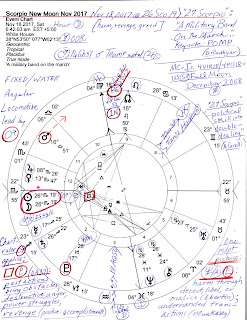 Fretfully, chart-ruler Mars applies to only one planet: co-ruler Pluto (0A37) suggesting distinct possibilities for destructive anger, power struggles, and revenge to manifest along with a potential for violence. This is an extremely karmic aspect hinting that past actions now bring obstacles and blockages (square) to current endeavors and it's easy to associate this with Mr. Trump's current political and familial predicaments and worries. And yet he may be feeling quite expansive and optimistic about now with transit Mars conjoining his natal 2nd house Jupiter (17Lib27) which is strong and Station Direct in his natal chart.

Still, this New Moon perfects during an Hour of the Moon (fluctuations, changes) and with Mercury in 1st house @17Sag25 and out-of-bounds, secret communications are occurring since Mercury is off on its own thinking and saying who-knows-what to whomever while ruling the Midheaven (Public Status; Career) of this chart. Curiously, the Mercurial MC-IC axis points toward America's Secondary Progressed (SP) Full Moon of December 2008 (4Vir10/4Pis10), a cosmic timing device that should have shown Washington DC that as a nation we had expanded into the world as far as we could safely reach--any more and we're overextended, a fact that many of us have been feeling in our bones ever since or before. It seems starkly obvious that military costs are sinking the US ship of state, as you may or may not agree.

Now in 9th house is this New Moon's Prenatal Eclipse (PE), The Great American Eclipse @28Leo52, the Total Solar Eclipse of August 21, 2017 that 'split' our nation into North and South halves and I continue to think that the primary theme of that manifestation of a 1 North eclipse is: information is distorted and possibly false (Brady). We now remain under its influence. Of course, when it comes to Politics and politicians (and the financiers they swear allegiance to) we should always keep that advisory in mind.

New Moon '27Scorpio': "A Military Band on the March"...keynote: POMP (Rudhyar). To this degree Adriano Carelli adds no word picture but he says that "political skill" can "sheer off" into "double-dealing." And here I was thinking that that was always a given in Politics!

So we plant seeds of our intentions at the New Moon and they blossom at the next Full Moon which will perfect on December 3, 2017 @11Gem40 with Gemini ruler Mercury Rx at a critical 29th degree of Sagittarius. This Full Moon will conjoin the Descendant (Partnerships and Alliances) in the July 4, 1776 late afternoon natal chart hinting at a culmination of some kind in the realms of US relationships. Yet we must avoid spreading ourselves too thin under the sway of the December Full Moon although the temptation to do so will be strong.

Now here are the two 'Images for Integration' for the Sun Scorpio-Moon Scorpio blend of double-Water energies in force at the November 18th New Moon: 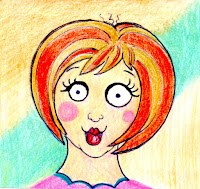