December 13, 2017: As you've heard, last night Democratic candidate Doug Jones was elected to the US Senate by Alabama residents who thereby voted their state into the 21st century. Of course, Jones' opponent in the Special Election, the controversial Roy Moore, intends to contest election results if there's any basis for doing so (exs: military votes have yet to be counted, a difference of less than 1/2% will automatically trigger a re-count--and voting Mercury is retrograde now).

Contested, re-counted, or final, let's see what can be gleaned from a speculative natal horoscope for Doug Jones--speculative since no birth time is known so 'noon' is used but with a 24-hour range of degrees for natal Sun and Moon. Yet a few chart factors are knowable even without correct timing of his birth. For instance, Mercury in Taurus (logical thinking) and Venus in Gemini (courtesy and cooperation, a desire for discussion) are in Mutual Reception and thus 'friendly' with one another.

Born May 4, 1954 in Fairfield, Alabama (Jefferson County), attorney Doug Jones is known for trying and convicting the Klansmen who blew up four little girls in church in 1963 (for which I say, Major Kudos to Mr. Jones!) During the recent senate campaign, attempts to paint him by Trump and others as soft on 'law and order' rang hollow to me, and apparently did so for many voters in Alabama--some who were uncomfortable voting for an alleged sexual predator of young girls, even a Republican one named Roy Moore.

The 24-hour period of May 4, 1954 shows the Sun (conscious mind) ranging from 13Tau14 to 14Tau12 and Moon (the unconscious/emotions) from 3Gem02 to 17Gem45. The last Lunar position conjoins Trump's natal Uranus, his guiding planet of quirkiness and cantankerousness in the sign of communications--while simultaneously conjoining the Uranus of Roy Moore, all at 17Gemini+.

His is an Earth-Air combo of rationality, efficiency, and innovation supported by an efficient Mars in Saturn-ruled Capricorn (6Cap30 at noon). However, Earth-Air blends have a tendency to become 'dry as dust' and give little attention to the emotional and/or intangible sides of life and may 'blow hot and cold' emotionally which can cause problems in close relationships. Yet this well-directed energy easily supports a career in law enforcement and, perhaps, in politics.

Sun Taurus-Moon Gemini denotes one who is down-to-earth and charming, a witty conversationalist, and dogmatic yet flippant. An impulsive talker, Mr. Jones personifies the 'country mouse vs city mouse' archetype and desires control and certainty in life while arguing and bullying his way along (useful traits for a legal prosecutor, I imagine.) This blend shows that his is a clear-headed and practical intelligence with a good business sense, and he is able to consider new ideas and put the worthy ones into practice without much fuss. With maturity, Doug Jones has probably learned that flexibility, not confrontation, gets the best results for all concerned. 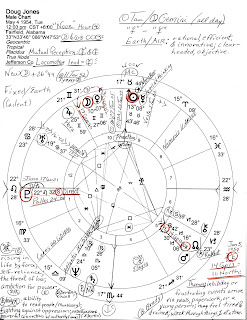 At noon on May 4, 1954, powerful Pluto @22Leo32 rises (ASC 22Leo28) and is greatly strengthened by its Station Direct condition. Pluto brings along Pallas, the ethics asteroid. (His Chiron @28Cap39 is Station Retrograde upon US natal Pluto, a plutocracy pairing.) Some caution is advised since 22/23Leo is the 'foot in mouth' or 'worst foot forward' degree (A. Louis) so we may see something occur with future Senator Jones along those lines concerning the realms of plutonian leadership (Pluto in Leo).

Also rising at noon is the midpoint between Moon and Saturn, a signature of ambition and strategy (Tyl). Moon-Saturn = Pluto suggests potentials for 'rising in life by force, a need for self-reliance, the threat of loss' (attorneys must feel this constantly), and, added by yours truly: ambition (Moon-Saturn) for power (Pluto). Last night he achieved this goal, if it sticks until his swearing in to Congress in early January 2018.

Another revealing midpoint picture which stays in effect for the 24 hours of his birth date is Pluto-NN = Saturn suggesting an ability to read people (Munkasey), fighting against oppression (as in the 1963 church bombing case), and truculence and rebelliousness (Ebertin). To this picture I would add powerful connections (Pluto-NN) to authority figures (Saturn). And of course, law-abiding Saturn also represents lawmakers such as those on Capitol Hill, and Pluto-NN contains a "tiger by the tail" flavor.

Now let's close for now with the Prenatal Solar Eclipse Saros Series into which Doug Jones was born. This Solar Eclipse (his PE) manifested on January 5, 1954 @14Cap13 in the 10 North Saros series and falls between his natal Mars (6Cap30, as noted) and North Node (16Cap42), a pair denoting teamwork and encounters with police forces and/or the military. 10 North themes are: inhibiting or frustrating events arrive having to do with news, paperwork and/or a young person; tiredness and a drained feeling may be attached; it's best to work through any difficulties one at a time (paraphrasing Predictive Astrology, Brady).

When a Prenatal Eclipse manifests in Saturn-ruled Capricorn, sign of government, law, and business, karmic advancement can occur by way of dedication and hard work, often at the expense of personal pleasure and worldly prestige. There are karmic links to authority figures (the father, or others he respects, probably older than him) and there is a tendency to join professional organizations and to show interest in government affairs. Here is what some people call 'an old soul' whose mission in life is to teach or enlighten others yet it may be difficult to reach out as a teacher from a spiritual standpoint unless karmic (reaping what's been sown) spiritual lessons have been learned (paraphrasing Your Prenatal Eclipse, Rose Lineman).

The most recent occurrence of a 10 North Solar Eclipse was on February 7, 2008 @18Aquarius; the next will be on February 17, 2026 @29Aquarius, a critical-crisis 29th degree. Three days later (Feb 20) transit Saturn and Neptune will conjoin in Great Conjunction @00Ari45, the Cardinal Aries Point of world fame, recognition, and fortune.

Well, there's my incomplete-without-a-birth-time astro-view of Senator-elect Doug Jones. More of his planetary chart factors are worthy of noting, of course, so I hope you may set up a natal chart for him and see what you discover!