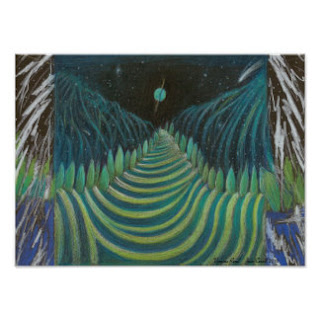 Tuesday January 2, 2018: This morning at 9:10:54 am est, Uranus turned Direct @24Ari34:13 on its projected path toward Taurus which it reaches on May 15, 2018 for a temporary stay. In Mars-ruled Aries, Uranus tends to behave like the Utopian reformer or blind zealot intent on anarchy (Ebertin) while in Venus-ruled Taurus there's more of a speculation, risking all in one go, and premature action leads to failure vibe, plus, resourcefulness in earning money may become necessary.

Transit Uranus has been retrograde since the first week of August 2017 (28Ari31) so the change of direction of the Sky God's quirky, unpredictable, sometimes shocking energy marks a major shift in many areas of life, no less in Washington DC's halls of power. You've heard that bipartisanship has been called for by the GOP and by Mr. Trump, and Democrats seem to be on board the bipartisan train as 2018 begins with Uranian derailment an obvious potential.

Looking ahead, some personal and societal unexpected developments may occur under Donald Trump's 2 Old North Prenatal Eclipse which manifested prior to his birth @9Gemini--conjunct US natal Uranus (8Gem55). 2 Old North repeats on July 13, 2018 @21Cancer (Castor-Pollux territory) in Trump's natal 11th house of Groups and Associations with its separation and unfortunate news concerning relationships themes although fast action can bring positive results (Brady). Because he's in the White House, 2 Old North themes relate to the American people as well as to Mr. Trump, his administration, and his family. (More 2018 eclipse info is linked, below).

And with 2 Old North's initial eclipse occurring June 24, 792 (OS) @5Can49, we may wonder if finances, banks, or Wall Street's bubbly stock market are uppermost for bad news and fluctuations since this points toward a conjunction with US natal Jupiter @5Can56. Of course, Congress, our official purse-strings holder-- reconvening tomorrow, January 3--figures into the eclipse picture with another partial government shutdown set for January 19, and other budgetary and funding issues up for resolution in 2018. And all this business and monkey business set to affect Midterms 2018 in November! However, it's the themes of The Tower Solar Eclipse in August 2018 that are most influential as the Prenatal Eclipse of the 2018 Midterm Elections manifests. Yes, 'collapse' themes are on the 2018 cosmic menu.

As for today's Uranus Direct Station, the difficult Cardinal Uranus-Pluto square of revolution is back (protests and revolt in Iran are again in the news as in 2010) and the Uranus Direct Station emphasizes the degree it seems to pause upon, so let's take a brief look at the Sabian Symbols involved--"24 Aries" as the karmic confrontation degree, and "25 Aries" for the exact station degree:

"24 Aries" = "An Open Window and a Net Curtain Blowing into a Cornucopia" which sounds to me like (more) theft via Internet hacking by Uranian techies, plus, leaks of info or intell meant to damage political opponents--or to steal money. Its keyword is MUNIFICENCE. Positive expression: irrepressible genius for capturing the richer rewards of life and providing a wider distribution for the higher realities. Negative (unconscious/shadow side) expression: a smug or petty self-importance in dispensing favors to others. Sound like anyone you know in politics?

"25 Aries" = "A Double Promise Reveals Its Inner and Outer Meanings"...Keyword: SENSIBILITY. Positive: a facility of adjustment by which everything in a given situation may be brought into the fullest cooperation with everything else (bipartisanship?). Negative: a lean to chicanery in all human relationships. Quite curious since 'chicanery' usually describes politics in general so I suppose all sorts of chicanery may now go forward with direct Uranus as it inches toward money sign Taurus. Yet to "25 Aries" Rudhyar adds, "The implied message is one of faith."

Now in my preferred realm of common-good politics, restoring faith in our government is possible if we can jettison the politicians who are in breach of the public contract--and elect those dedicated to the best interests of We The People! Of course, persuading honest people to run for office is the next challenge.

For more details see The Sabian Symbols in Astrology by Marc Edmund Jones, or An Astrological Mandala, Dane Rudhyar.

Another note is that today's Uranus Direct Station occurs in Mr. Trump's natal 9th house of Philosophy and Foreign Lands and considering electric Uranus's association with air travel, we may soon see him jet off and leave his domestic troubles behind temporarily. Perhaps we'll even hear--gasp!--a change of ideology or belief tweeted from the ever-changing Uranian Mr. Trump with his natal Sun and North Node in 10th house along with his guiding planet Uranus in the lead, all three in changeable Gemini.

Now here's some good news! Fortunately for those of us who feel a need for guidance under the newly direct rays of the rebel planet, Julie Demboski addresses effects within the social order and how we can best handle the pressure and the 'blindspots' affecting relationships and/or finances in today's AstroEssence message 2 January 2018 Uranus Direct, Everybody Else in Trouble!.

A Related Post: Eclipses and a Few Other Cosmic Events of 2018.