Update Feb 9, 2018: "Overnight Shutdown"! USAToday provides a Timeline of congressional goings-on last night into today with the House voting 240-186 in favor of the massive funding bill "around 5:30 am ET" which Trump signed into law this morning around 8:30 am give or take (based on his 8:39 am tweet). Rand Paul didn't get support for his grandstanding of the fiscally irresponsible Republican Party, and the Democrats didn't get their way on Dreamers/DACA either. Apparently Mercury conjunct South Node ruled with its 'inability to gain support (votes!) for ideas' (see horoscope, below, penned on top), and rising Jupiter in Scorpio took the cake with help from a sextile to powerful, wealthy manipulator Pluto (at critical-crisis degree of 20Cap). The Jupiter-Pluto sextile is base of a YOD pattern (crisis; turning point) pointing toward Trump's natal Sun-North Node conjunction = political activity and shared success (Ebertin).

As of February 9, 2018 @12:01 am est, the 115th incapable and incompetent US Congress has shut down the US government again under Trump's watch, egos at its base, money on and under the table, and Trump lurking about the place (rising Jupiter in big-business oriented Scorpio leading the rest of the planets (actors)). 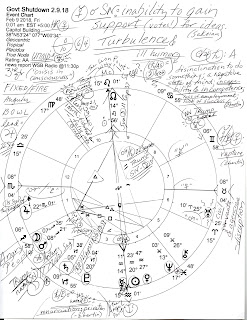 My notes are penned on the chart. Someone will be almost certain to call it the Rand Paul Shutdown!

A further note: testy Mars applies to a square aspect with unstable Neptune thus reminding Americans of our national Mars-Neptune square of misguided motives and actions.