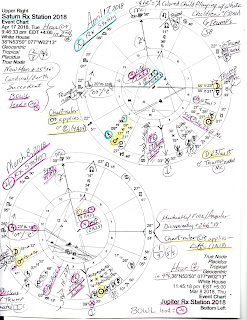 March and April 2018 bring two major changes of direction for the societal pair of planets, Jupiter and Saturn. Here you see both horoscopes set for the White House and the exact moments of both shifts. Sextile by sign (Scorpio/Capricorn), the two transiting planets of expansion vs restriction act as the Flywheel of the Universe keeping our solar system's planets from veering off-course and wandering away. The Great Mathematician set it up for us! And I think of this every time I pray, Thy rod (Saturn) and Thy staff (Jupiter) they comfort me. And so our Creator does, as the children's song says, have the whole world in His hands.

Who Plays Santa This Time?

Heavenly principles are preferred by yours truly yet here on SO'W we have Washington DC Politics to consider, ugly and hate-filled as the practice may be. However, let's not think about which political party is represented by generous Jupiter and which by austere Saturn these days for the parties do like to change sides whenever it behooves them, morphing one into the other depending on the issue at the time--and on which party controls the White House, House, Senate, etc--the balance of power, a Jupiter-Saturn concept. Checks and balances, a favored stance in America as long as it lasts, also falls under the auspices of the Jupiter-Saturn combination of energies thanks to the increasing/limiting tension between them.

So the two horoscopes you see here are set for Jupiter's Rx Station on March 8, 2018 11:45:18 pm est (lower left) with stationary Jupiter rising as he leads the rest of the planets in a BOWL shape. Note that Jupiter is in the same leadership position in the April 17th chart with BOWLs denoting the empty houses as realms of experience shut off from him, self-serving as he may be. Here Jupiter's achievements cannot be realized from Gemini through Libra concerns which of course include Mr. Trump's Uranus-NN-Sun in Gemini and Neptune-Chiron-Jupiter in Libra; his Venus-Saturn conjunction in Cancer chimes in when needed and loyalty is the thing. However, transit Jupiter, planet of protection, conjoins Mr. Trump's natal IC but will not cross his IC into 4th house just yet. Transit Jupiter turns Direct @13Sco20 on or about July 10th and will enter Trump's natal 4th house in October 2018.

Meanwhile, transit Saturn has a few plans of his own and, as you see, Stations Rx on April 17, 2018 9:46:33 pm edt @9Cap08:55 and does not turn Direct until September 6th or so, depending on your location; this Direct Station occurs @2Cap32 and restrictively opposes America's Cancer Trio of Venus, Jupiter, and Sun. Anyone who keeps up with old man Saturn knows the karmic difficulties of these three transits in opposition to US leadership. Of course, once tr Saturn enters the 24-29-degree range of Capricorn, the surveillance-mad US natal Mercury-Pluto opposition is due for karmic accountability as well and may suffer significant retribution of some kind for Saturn will oppose our national Mercury (of July 4, 1776) and conjoin US natal Pluto (27Cap33). Using an orb of 5 degrees applying, Saturn's opposition to little Mercury begins in late March 2019 with the conjunction to natal Pluto a major issue as early as January 2020--which is also the period of the Great Conjunction of Saturn and Pluto. Obviously, trouble lies ahead!

And one more note: the MC of the April 17, 2018 horoscope shows a Midheaven (Goal Point) of 3Vir50 and the rounded-up Sabian Symbol for '4Virgo' is penned there..."A Colored Child Playing with White Children." I mention this because our nation's enemies have always known that racism is a political wedge issue they can use to keep the American people divided against one another--and as such, it keeps us weakened and confused about the identity of our country's true saboteurs. And because '4Virgo' is one degree beyond Donald Trump's Secondary Progressed New Moon @3Vir00:12 which perfects on September 19, 2019.

Therefore, we know that Mr. Trump is acting during a darkened phase of the Moon when clarity is difficult to come by and if you follow the link there are more details concerning the '4Virgo' Sabian Symbol and its sympatico significance with a certain dictator he is said to admire. Plus, the degree's negative expression (Jones) may sound familiar and very much like someone we both know: a lack of capacity for psychological adjustment.

As for the March-April 2018 dual charts you see here, most if not all of my notes are penned upon the charts so please enlarge the image for better viewing if and as you prefer!

And for a few other cosmic events of 2018 try this post which includes links to Eclipse horoscopes set for Washington DC, plus other cosmic info if you're curious.