Horoscope and Astro-Notes on Hope Hicks 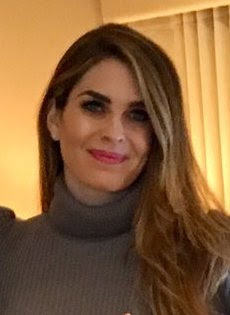 News Update Feb 28, 2018 5:30 pm est: Hope Hicks is resigning as WH Director of Communications after admitting yesterday on Capitol Hill that she tells "white lies" for the White House (Trump).

Tuesday February 27, 2018: This morning White House Director of Communications and longest serving political aide to Donald Trump Hope Hicks is to appear before the House Intelligence Committee concerning alleged Trump campaign involvement in Russian meddling in the November 2016 election. Her appearance was postponed from last month due to the kerfuffle over Steve Bannon's testimony and Mr. Trump should note that the 'attorney-client privilege' hedge is not applicable in the case of Hope Hicks though whether or not she'll actually answer any questions remains to be seen.

The Wikipedia page for Hope Charlotte Hicks provides a few basic details of her life of 29 years but let's take a brief peek at her natal planets and PE. Sans an accurate birth time we'll look at 'noon' on October 21, 1988 Greenwich, Connecticut but with consideration for the 24-hour range of degrees for her Moon and Sun. Naturally her age implies that a Saturn Return may be in play as she or others are held accountable for past actions but we'll see how close the timing is to today's Capitol Hill appearance. 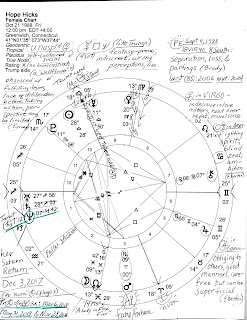 As you see, 1988's weighty trio of planets Uranus-Saturn-Neptune figure strongly in the psyche of Hope Hicks where transit Saturn, the authority and The Establishment, now plods (Saturn today = 7Cap12). On the chart (lower left) are penned the dates that tr Saturn hits natal Neptune: March 6, 2018, May 31, 2018, and November 29, 2018. As you know, this is the 'dream come true' OR 'the grim face of reality' transit and considering her involvement with the Trump Organization and today's Capitol Hill visit, I'd say it's more the latter than the former for Miss Hicks. And note that monetary matters are suggested by this transit. So I would say that 2018 is a Saturn-to-Neptune year for Hope Hicks. However, the amount of Saturnian honesty, realism, and authenticity may negligible from today's House Intell Committee testimony, because for one thing, Miss Hicks was born with a fantasy-prone Mercury-Neptune square as was the truth-challenged Donald Trump! Another of her tendencies toward fact-distortion is revealed by a Neptune-Chiron opposition (0S33) which suggests one for whom the only reality is subjective for she believes that objectivity is an illusion--'there are no facts' (r. Nolle).

The Moon-North Node connection relates to her role in public relations and communications, and her unaspected Venus (impaired perspectives, lack of evaluation before taking action; a social 'wallflower'??) is in friendly mutual reception with communicating Mercury in the Venus-ruled sign of lovely Libra. As you see, her Syzygy Moon (last lunation prior to birth) @17Lib48 conjoins Mr. Trump's natal Jupiter Station Direct. Financial security is a driving force for Hicks (as for Trump) but hopefully, today's House committee members won't be blinded by the obvious beauty of this lovely Libra! Yet trouble in love matters is also shown in her chart (which won't be discussed here except to note that her Pre-Natal Solar Eclipse manifested on September 11, 1988 @18Vir40 in the 8 South Saros series with themes of loss, separation, and partings (Brady). 8 South last occurred in 2006 and will manifest next in 2024 @10Libra conjunct her natal Mercury.

As for active motivator Mars (00Ari09), you see he is retrograde at Aries Point making the achievement of fame, recognition, and fortune practically a given, plus, Neptune in Capricorn is inspired to attain goals by crooked means if necessary. On the right side of the chart you see Mars in Aries and Venus in Virgo listed. Lower right shows her Jupiter Rx in Gemini so we know she relates to others as a Mercury-ruled Gemini (and behaves as a Sagittarian--Uranus in Sag). And of course, Pluto in Scorpio indicates a talent for exercising subconscious suggestions to others, fanaticism, record achievements (her Mars = AP approves!), and having a share in tragic events (Ebertin) which describes for some people the Trump White House.

Now let's take a peek at her Air-Water Sun Libra-Moon Pisces personality blend for which we don't need an accurate birth time since Sun and Moon remained in their signs for the 24-hour period of October 21, 1988.

This blend reveals one who is creative, adaptable, perceptive (even if her perceptions are off-the-mark with Mercury SQ Neptune), sometimes lazy, and talkative. Yet she is also a good listener who demonstrates non-judgmental empathy for others (which is very good for remaining in your job with the flawed and often-criticized Mr. Trump). Miss Hicks is a dreamy romantic who is capable of genteel diplomacy which she must use for advising her emotionally sensitive boss. Plus, her tendency toward vacillating moods is similar to Trump's moody Gemini-Sagittarius morphing ability on any issue. Her changeable Pisces Moon is difficult to pin down and 'diplomatic' answers (Libra) may be all she offers today's committee. Cautions are: a lack of conviction, indecision at crucial turning points, agreement with various points of view (similar to Trump who agrees with the last opinion he heard expressed), and a tendency to drift into new intimacies once the last one becomes boring.

Yes, Hope Hicks is a 'people-pleaser' as identified by Sun Libra-Moon Pisces who can adapt to almost any situation. Note that his personality blend is shared by some illustrious folk: occultist and sex-maniac Aleister Crowley, former Canadian PM Pierre Trudeau (Justin's father), and famed playwright Eugene O'Neill who informed us that,

"None of us can help the things life has done to us...at last everything comes between you and what you'd like to be, and you have lost your true self forever."

"The curtain comes down, the actor takes off his mask and, in privacy, looks into his mirror to find himself as a child of six with his imaginary friend."

Well, hopefully Hope won't have to depend on the unreliable, loyalty-demanding Donald Trump for the benefits of true friendship!

July 18, 2019 Update: the July 2019 Solar and Lunar Eclipses have contributed to the uncovering of texts, emails, etc which implicate Hope Hicks and David Pecker in Trump-Cohen pay-off funny business... jc

February 13, 2020: it's being reported that Hope Hicks will return to Trump's side in the WH since his brazenness has increased thanks to his fake acquittal. jc