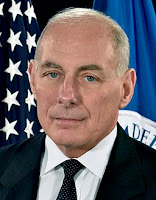 Now acting as Donald Trump's White House Chief of Staff, former Marine commander and Homeland Security Director John Kelly was born on May 11, 1950 in Boston, Massachusetts. Brief astro-notes follow but first you may wish to check out 10 Things You Didn't Know about General John Kelly.

Also recommended is TwilightStarSong's insightful post on John Kelly where you can view a speculative noon version of his natal horoscope which shows his Moon @21Pisces and Sun and Mercury Rx in Venus-ruled Taurus. As you know, Pisces is sometimes a 'military general' sign but of course even then there may be something of a soft underbelly (see his limpid blue Pisces eyes). Plus, note that Kelly's natal Jupiter, The General, is in Pisces as well.

And if you're familiar with the natal horoscope of Donald Trump you can see that Kelly's Sun-Mercury Rx conjunction in Taurus sits upon Trump's natal Midheaven (24Taurus), Kelly's natal Chiron conjoins Trump's problematic SN-Moon conjunction in Sagittarius--and if Kelly's natal Moon really is around 21 degrees of Pisces, it conjoins his natal asteroid of corporatism, Cupido. That's one of the main objectives of the US military, you know--to protect corporate interests. Racketeering!

The Personality of General John Kelly

'Easy-going yet determined' is a good way to describe his personality which can be seen by his practical Earth-Water Sun Taurus-Moon Pisces blend since the Moon remained in Pisces (15:43--27:50) for the entire 24-hour period. This blend mixes the realism of earthy Taurus with the creative imagination of Pisces as Bull and Fish combine to form a 'nature mystic'. Resourceful and poetic, Kelly is a practical dreamer who is responsive yet reserved, a capitalist and socialist in one.

A private person, he tends to withdraw for dreaming, brooding, and recharging emotionally. At heart he is an idealist who may seem to have taken a vow of silence! Yet he's a hands-on person with many practical skills, solid, dependable, and a hard worker (which is good since Trump isn't). John Kelly is a quiet man with a capacity for understanding others though naivety may be a problem at times along with moodiness and a dash of self-pity. He can also be resistant to logic when it doesn't suit him!

The Sun Taurus-Moon Pisces personality blend is shared by some illustrious folk such as Leonardo da Vinci, Ann Boleyn, Audrey Hepburn, Samuel Morse of Morse Code fame, naturalist-conservationist John Muir, and (more to the point) soldier-politician the Duke of Wellington.

As for his Pre-Natal Solar Eclipse Saros Series, that would be the 6 North which manifested prior to his birth on March 18, 1950 @27Pis27. Its themes have to do with one's relationship to authority figures and the need to take responsibility and control and accept commitments that occur due to another person's unreliability. Sound about right?

Last 6 North: 2004 @30Aries; next 6N: 2022 @10Taurus which conjoins the speculative noon Midheaven of his natal horoscope. Also note that the noon Ascendant will be conjoined by the upcoming August 11, 2018 Solar Eclipse ('The Tower') @19Leo which may have no influence upon him in particular unless we count his noon chart as significant for career matters. Or, unless John Kelly was born at or very near noon.