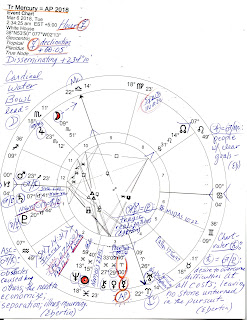 In 2nd house you see the current Solar Eclipse of February 15, 2018 (27AQ07) in the 1 South Saros Series (flooded with ideas or options--Brady) where karmic progress can be made, and the last lunation, the Syzygy Moon @11Vir22 in the corporate 8th house as is the North Node of future direction. As you see in the horoscope, the planets form a BOWL shape with the fluctuating Moon @9Sco51 in 10th house leading the planetary throng; quirky radical Uranus @26Ari09 and asteroid of grieving mothers, Niobe, conjoin the Ending or Foundation Point of the chart, the IC. Pluto at a critical degree (20Capricorn) and rising behind Saturn, both karmic planets set to meet in Great Conjunction on January 12, 2020 @23Capricorn.

Three midpoint pictures are penned on the chart; any, all, or none may apply:

A Changeable Moon Fighting for Survival in Scorpio

The double Water blend of Sun Pisces-Moon Scorpio suggests a period of emotional and psychological insights and intuition, deep and complex feelings, and mental clarity for those who can transcend their personal prejudices; courage in the face of adversity may be in evidence along with the tendency to manipulate others in order to increase one's power and advantage while using scathing criticism and a fighting spirit in the process.

Sun Pisces-Moon Scorpio blend is shared natally by author John Steinbeck who perhaps puts the day's energies into context saying, "It is the nature of a man as he grows older...to protest against change, particularly change for the better." 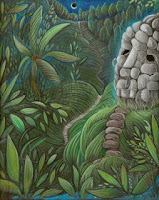 '1Aries' = "A Woman Rises Out of the Water, a Seal Is Embracing Her"..."REALIZATION...the self cannot separate itself from its own private obsessions." (The Sabian Symbols in Astrology, Marc Edmund Jones.