March 6, 2018: political consultant Sam Nunberg has been all over the news this week related to the Mueller investigation--here's an update on Sam Nunberg, former (twice fired!) employee of Donald Trump and accolyte of political operative Roger Stone who considers politics to be "performance art" (which is what I've been blogging for over 12 years now--political theater, dahlink!). Mr. Nunberg now says he will indeed respond to the Mueller subpoena after asserting yesterday that he would not because it might imperil his mentor, Roger Stone.

Without a birth time or a confirmed location of his birth (I suspect New York City so I'm using it to set the chart), here's a speculative 'noon' horoscope for Sam (Samuel?) Nunberg, member of the New York state bar, and man born with thinking-communicating Mercury Rx melded to his natal Sun (self-absorb much?) which is probably @00Cancer+ but if born prior to 7:54 am edt, may be in the last degree of chatty Gemini; Moon is in Aquarius (10:13--23:04). Either way, Sun and Mercury conjoin one of the Cardinal World Points of Manifestation so it seems that world fame is one of Mr. Nunberg's objectives in life.

Please enlarge the image if you wish to read the few notes penned on: 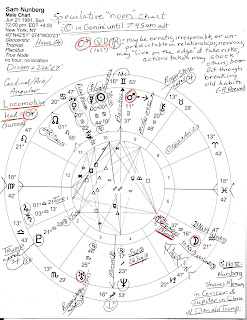 Blog Note: the idea to post a version of the Nunberg natal chart was inspired by Leo Moon.