If you remember, Politico ran a story back on September 12, 2018 titled, Eric Trump accused of anti-Semitism after 'shekels' remark when he spoke of Bob Woodward, author of Fear: Trump in the White House which debuted in September 2018 and is now a most-read best-seller on Amazon.

Now, thanks to singing canary Michael Cohen, Trump's former fixer and bag man, we find that Trump reportedly directed Michael Cohen and Eric Trump to keep Stormy Daniels quiet and that Eric enlisted the aid of a Trump Organization lawyer to do just that. This puts Eric Trump in a brighter, more dangerous spotlight than even his misappropriation of charity funds has done. See Eric Trump's charity remains under investigation. Apparently, the charity has been used by the Trump family as their personal 'piggy bank'.

This sort of financial slight-of-hand appears in the natal horoscope of Eric Trump--primarily through his speculating, inflationary, fraud-leaning Jupiter-Neptune conjunction which also links to his truth-challenged Mercury-Neptune conjunction and forming a trio of planetary slight-of-hand! This trio is how Donald Trump's fantasy-prone Mercury-Neptune square and his 2nd hou$e Neptune-Chiron-Jupiter trio express in the chart, psyche, and behavior of his middle son, Eric, and it creates a midpoint picture of interest, Mercury-Jupiter = Neptune with potentials for: tendency to bamboozle or mislead others; 'to lose the solid ground under one's feet' during speaking; a person successful in deception or speculation; a powerful imagination (Ebertin). Turns out that when it comes to such things as financial dealings, a "powerful imagination" can land you in hot water!


So for your consideration, below is a 'noon' horoscope (birth time unknown) for Eric Trump, born January 6, 1984 in New York City; please enlarge the image to read my study notes; today's transits (Oct 16, 2018) are marked in turquoise around the chart: 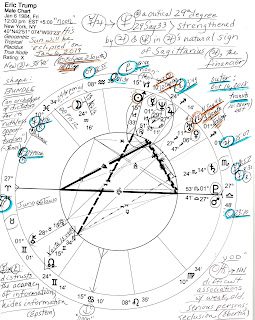 Now without an accurate birth time I'm not inclined to write much more concerning this natal chart and will leave it to you, dear reader, if you wish to delve more deeply into it. However, a few notes on the Prenatal Solar Eclipse ('PE') of Eric Trump are in order. Highlighted in orange on the chart and conjoining his natal Uranus, Eric's PE perfected on December 4, 1983 @11Sag46 in the 3 South Saros Series. This echoes his father's PE in the 2 Old North series which repeated for Donald Trump on July 12, 2018 @21Cancer because in 1946, Trump's PE @8Gemini conjoined America's natal Uranus, our country's 'totem planet' of revolt and revolution. And as you know, eclipses are considered 'wild cards of the universe' affecting events in similar fashion to quirky Uranus, planet of disruption and chaos, Trump's favored way of 'ruling'.

As for Eric's PE, themes of eclipses in the 3 South series tend toward: 'sudden endings of associations or relationships, possibly with a young person' (a family member as in divorce? plus, his Venus-Uranus conjunction--jc); 'traumatic transformation and emotions via Pluto's involvement' (in 3 South's initial eclipse of August 13, 1208 @27Leo10 when Pluto was @10Leo15--conjunct Donald's natal Pluto 10:02!) 'through news received or short journeys undertaken' (Brady's Predictive Astrology).

Of upcoming significance, the Solar Eclipse of January 6, 2019 @15Capricorn 'eclipses' Eric Trump's natal Sun but manifests in the 2 South Saros Series. 2 South's theme: 'unusual groups, involvement with such groups, and feeling that a great deal will be gained' (Brady). As long as this doesn't turn out to be a prison group, Eric Trump should feel well out in 2019 although an indictment cannot be ruled out for it may well be in his cards.