Will Trump Fire Jeff Sessions After the 2018 Midterms? 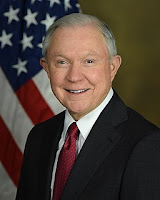 In a previous SO'W post concerning the natal Jupiter of AG Jeff Sessions we discussed Beauregard's planets and in other previous posts the topic has been the November 6th 2018 Midterm Elections which, talking heads seem to agree, may time the firing of Attorney General Jeff Sessions by a Donald Trump desperately trying to stop the Mueller investigation.

Taking a quick peek at the horoscopes of Jeff Sessions (December 24, 1946 'noon' Selma, AL) and the 2018 Midterms, suggestive planetary links between the charts are shown. One degree area of interest includes Sessions' Capricorn planets: Sun @2Cap20 (at noon), Mars @5Cap31, and Moon possibly @15Capricorn for as you know, transit Pluto in Capricorn has in recent years intensified that degree area with Mr. Underworld's powerful transformative energies. However, an area of concern in 2018 is the position of restrictive Saturn on November 6, 2018 @5Cap24 which conjoins the natal Mars of Jeff Sessions. This is an energy-zapping, lowering transit during which relationships, particularly those with other males, may be limited in some way--or broken off completely.

Another hint is that on Election Day 2018, transit Sun @14Scorpio squares the natal Pluto of AG Sessions (which conjoins his natal Saturn in Leo). Sun square Pluto denotes potentials for direct confrontations and/or the betrayal of confidences. And loss-leader Neptune @13Pis47 Rx at the 2018 Midterms (planet of scandals!) forms a T-Square with the natal Mercury-Uranus opposition of Jeff Sessions which suggests nerve troubles (Ebertin). Well, I'd be nervous too if I had to deal personally with Donald Trump and his 12th house Mars and Pluto! Not that the prospective firing of Jeff Sessions will be done in-person, mind you, but if Jeff Sessions is fired at any point it will probably be second-hand in a tweet or on TV.

Now it's true that none of this planetary action may be sufficient to describe Mr. Trump firing Mr. Sessions around or after the 2018 Midterms, but if Congress assures Mr. Trump that they will confirm a new Attorney General once the Midterms are off the political calendar, what more justification will the vulnerable Donald Trump need?