Enough of Trump--now for something completely different. Well, not too different for we of the Flower Power generation circa 1960s must get out and Vote on November 6th if we haven't for if the Cosmic Peace Symbol of planets in effect during the Total 4 South Solar Eclipse of November 12, 1966 @19Sco45 still has any meaning at all, hopefully we'll vote en masse for compassionate candidates and not for those who favor and promote hatred, intolerance, and violence. That's my personal hope anyway! 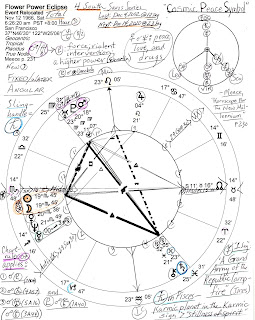 Hour of the Moon (fluctuations, instability); chart-ruler Mars applies to three planets (see chart, lower left); violent trio of Mars-Pluto-Uranus in Virgo 10th house opposes Saturn Rx in Pisces which conjoins Wounded Healer and Blind Spot Chiron also Rx in Pisces which suggests social rigidity vs archetypal forces seeking to force their way into public consciousness. A difficult midpoint picture is formed between Mars-Uranus = Pluto (which conjoins fixed star Denebola: to go against society, or, out of the mainstream which can describe the Flower Power generation)--but also Nixon's government with potentials for the use of force, violent intervention (such as Kent State 1970), and battling against a higher power (Ebertin; Munkasey).

The most prominent planet in the eclipse chart besides the eclipse itself, is karmic Saturn in the karmic sign of Pisces for Saturn is the handle of a Sling shape--like a Bundle except the handle planet assumes great significance because the energies of all the other planets are directed toward it. And while a Bundle shape in its extreme manifestation is the archetypal signature of a ruthless dictator (Mussolini was born with it, Trump has it now via his Secondary Progressions--you can view the Bundle in his SP New Moon Horoscope of September 16, 2019). Guess that's the ruthless mindset it takes in order to cage innocent children and to order the US military to the border to shoot kids throwing pebbles and rocks--and Trump's got it. Nixon's natal horoscope shows a Locomotive shape led by Mars @29Sag44--the 'ruthless executive' pattern--while Mussolini's natal Uranus @20Vir52 conjoins Pluto in the Flower Power Eclipse chart shown here. All three men answer to the 'win-at-any-cost' model in which the ends allegedly justify the means, the use of force and violence included.

This Solar Eclipse in Scorpio sparked two fixed stars by degree (19 Scorpio). First is Alpha Serpentis, keywords: tragedy and misfortune; plus, Devore gives 19 Scorpio as "the crucial point in the struggle between the Supreme Will and the ego"; Anthony Louis notes that it is traditionally considered by some to be "an accursed degree of the accursed sign," but adds that "this is not too reliable." The second star is North Scale which contains both positive and negative potentials of 'wealth, honors, intelligence, distinction, success in religion, law, writing, war, and sports'; negatives are 'hasty words cause problems, tragedy, and violence' (Horary Astrology Plain and Simple, A. Louis).

Plus, a third star, South Scale, rises in the eclipse chart with the separative, neurotic South Node of the Moon along with Hidalgo, one of the "power" asteroids which reminds me of the era and the book The Teachings of Don Juan: A Yaqui Way of Knowledge by Carlos Castenada, published in 1968 and originally his Master thesis in Anthropology at the University of California. Even now, the debate continues as to whether Castenada 'made it all up' or actually experienced the events he describes in the book. Keywords for South Scale are 'theft, loss, betrayal' (our generation felt betrayed by The Establishment in more ways than the Vietnam War--US bombing increased in 1966), venereal disease (a dreary downside to our misguided 'free love' illusion), revenge, anguish, criminality, abuse, and/or drowning'. These potentials sound very Neptunian and Piscean, don't they?

And accompanying the eclipse is a Venus-Neptune conjunction in sexy Scorpio, a duo suggesting those who live in a beautiful world of the imagination, plus, love and adoration, goddess worship, erroneous if idealistic perceptions about love and sex (deluded love), escapes from reality--through dreams and visions--or, through drugs, pop music and psychedelic art.

Now this eclipse falls into the 4 South Saros Series, as noted above, with themes of 'strong emotional feelings about relationships and/or money with a sense of fate or karma attached' ('soul mates forever'?); 'anger or lust; relationship events that are beyond personal control' (passionate, intense Scorpio is all about control of self and others--and betrayal); 'much frustration as emotions are blocked or checked somehow; a sudden desire to end a relationship; avoid rash action until issues settle down' (paraphrasing Brady's Predictive Astrology).

Additionally, any Solar Eclipse in Scorpio offers the cosmic gifts of 'probing insight' for discerning the 'root causes of karmic situations and problems' but it's up to individuals to use such knowledge for gaining karmic progress or not. However, control of the darker side of Scorpio is imperative in order to create positive outcomes from the events and conditions brought by the eclipse otherwise via Scorpio and its ruler Mars, sub-ruler Pluto, hatred, cruelty, sexual perversions, vengeance, and the primal urge for retribution can override humanity's capacity for forgiveness.

So how do you think America's Flower Power generation is managing the karmic retribution vs forgiveness imperative so far?