Astrology of the National Rifle Association

In December 2012, yours truly published a post concerning the Astrology of the NRA, no horoscope shown. Then in August 2018, I did it again, this time a post titled NRA Founded under Mars-Saturn-Pluto Vibes, again with no horoscope shown.

Sometimes I neglect posting a horoscope here when no birth or founding hour is known which is the case with this November 17, 1871 hot mess of an organization but tonight I've posted below the 'noon' horoscope for the one or two readers who may be curious to see the chart and because the group is in the news currently in part due to the 2018 Midterms this week. Enlarge the image if you wish, for I've added its Prenatal Eclipse ('PE'; in 5th house at noon) @16Can57 in the obsessive 18 North Saros Series of high stress, accidents, and physical concern.

And of course we can't miss the harsh Mars-Saturn conjunction in Saturn-ruled Capricorn conjoining one of the 'victim' stars, Facies with Mars-Saturn the pair that make up the 'death axis' according to Reinhold Ebertin. And you may wish to marvel at the Sun @24Scorpio which shines upon the natal IC of Donald Trump, and NRA's North Node pointing toward America's natal Mars with its tragic 'fog of war' square to our national Neptune in Virgo. Also check out the upper right scribbles of "NRA + GOP Potentials" between two brutal NRA midpoints and the GOP's natal Neptune @14Pis01 (now having its Neptune Return) - in fact, reports say that NRA funds are less than usual, spending on the 2018 Midterms is down, and its control on US Politics may be weakening just as the midpoint pictures say and this has given gun control groups more leeway: 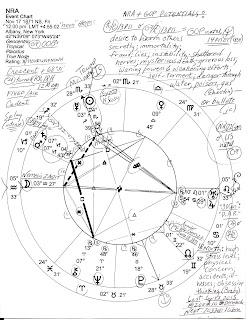 Not listed on the chart are the three dates of the 2018 Saturn Return/s of the NRA which are:

1. February 25; June 10 Rx; and next--November 23, 2018. Now as you know, Saturn is a karmic planet (reaping what's been sown) so during a Saturn Return, it's Accountability Time when taking responsibility for past actions is demanded by the Cosmos. Can this be part of the Saturnian restriction and the limitations the NRA is experiencing in their coffers and political influence?