The Department of Justice's Uranus Return 2018-19 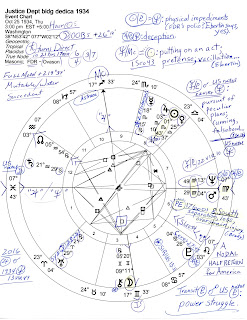 It seems an eon ago, but on November 22, 2017 we discussed planetary returns to the DOJ horoscope circa 2017--2018 which include the department's current Uranus Return, a 'three-fer' to its natal degree of 29Ari21 in the 2nd house of the National Treasury (its three exact return dates are listed). Here I'm republishing the 1934 chart in case you'd like a gander.

Of course, 29 degrees of any sign is considered a critical or crisis degree and with political and legal events as they are, it seems significant to me that the DOJ's Uranus Return period is in process on into 2019--a drawn out period of time due to the retrograde of Uranus. Now as you know, it takes approximately 84 years for quirky Uranus to complete an orbit and few folk can say precisely what a Uranus Return means (which actually tallies with the planet's well known reputation for unpredictability). The little I know about Uranus returning to natal degree may be found in the above-linked post if you're curious. Disruption, separation, unorthodox methods, a break from the past? Who can say?

Well, one thing we know: with any planetary return, natal aspects may be repeated, activated, triggered. And on October 25, 1934, Uranus opposed the Sun (restless, independent, taking uncharacteristic actions), Venus (unconventional relationships, reversed legal decisions), and Jupiter (new knowledge, searching for values, economic instability, fortune-hunters), trined Mars (progressive projects, unusual actions, unstable conditions), and squared Pluto (untapped energy, elevated consciousness, inventiveness, shift in political power, control of resources). These potentials and more are now activated or stimulated in matters related to the Justice Department thanks to the return/s of erratic, shocking, electric Uranus to its 1934 position, but just how is the question going forward. My advice? Check out the news! For Mr. Trump's 10th house Uranus in Gemini is his 'guiding planet' of chaos, quirky notions, and disruption.

Now also in the 'planetary returns' post, a daring reader will discover a link to another SO'W entry concerning the esoteric (Uranian?) bas relief of symbols carved on the DOJ building, symbols which are daily activated by sunlight. Weird stuff. Especially considering that Uranus in Aries, as it is again on November 6, 2018 (Midterm Elections), suggests blind zealots, fanatics, and/or Utopian reformers and radicals (Ebertin) who'll be 'doing their thing' at least until Uranus moves into staid, conservative Taurus again on or about March 7, 2019.