December 22, 2019: with Christmas prep in full swing and out-of-town guests expected soon, plus, the fact that multiple major events will transpire between now and September, I shall venture a peek at the September 28, 2019 New Moon Horoscope set for the Capitol Building, Washington DC. Many of my thoughts on this significant New Moon in relation to Donald Trump are penned upon the chart if you don't mind enlarging the image to read them but below are a few chart details that stand out to me. 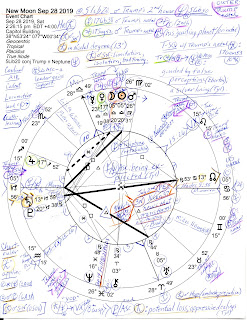 The New Moon @5Lib20 (9th house) conjoins the natal 2nd house Neptune (5Lib55) of Mr. Trump who, one assumes, may still inhabit the Oval Office in September 2019. Seeds are being planted which may blossom around the time of the next Full Moon of October 13, 2019 @20Ari14, a critical-crisis degree. Other potentials in the New Moon chart include a 'silver lining' (Jupiter-n Uranus = tr Neptune) or one who is guided by 'false perceptions' which Big T certainly is, and of course, both potentials can apply.

Asteroid Nemesis (divine retribution; the unbeatable foe) conjoins Trump's natal Ascendant in 8th house, and rising at the New Moon is transit Saturn conjunct South Node, a doubly karmic indicator of reaping what was sown in the past--perhaps that's a depressive cosmic indicator for our sabotaged America.

And there's powerful manipulator Pluto with his 'hidden wealth' following at a critical-crisis degree (20Cap). Pluto in 1st house = large-scale events that no one person can control.

Naturally, this difficult Saturn-SN-Pluto trio in 1st house conjures an image of the January 12, 2020 Saturn-Pluto Conjunction which will conjunct the natal Vertex of Donald Trump with fated undertones which may denote a meeting with karma and/or may also suggest his release from presidential responsibilities with little if any damage--through resignation, impeachment, indictment, and/or an ill-deserved pardon for his crimes. Or is death suggested by Saturn-Pluto = natal Vertex? Well, that's for a Higher Authority to decide, not this lowly novice astrologer!

Other notables are the September 28, 2019 transits shown in the chart which conjoin or oppose the natal planets of Mr. Trump whose natal placements are highlighted in lavender pink, outer. Besides New Moon conjunct his natal 2nd house Neptune (a new cycle of shady finances or a financial revelation hidden until the next Full Moon?), natal Jupiter and his guiding planet, Uranus, are triggered by transit Venus (17Lib38) to Jupiter (exaggeration, overindulgence, or the 'good life' calling) and transit Jupiter opposing natal Uranus (exact 3 times in 2019: February 1, June 23, and September 28, as you see--a transit of sudden changes in career, routine, and/or relationships, a longing for greener pastures or golf courses, and nervous feelings as responsibilities and other people present obstacles, limitations, and restrictions.)

As you see, transit North Node @13Can53 conjoins the US natal Sun and suggests the US presidency in the spotlight, plus, 7th house can indicate open enemies which many folks believe can describe Donald Trump. Still, 7th house is the house of Partners and Relationships as well so we'll see if the conjunction denotes significant meetings with POTUS. Then there's US natal Jupiter (5Can56) setting on the New Moon's Descendant (in DC) with Jupiter's Sabian Symbol of "Game Birds Feathering Their Nests," which has always been a pretty good description of Washington politicians in general, don't you think?

Two other difficult 2019 transits for Mr. Trump (not shown in this New Moon chart) which I want to mention are the three times that transit Saturn @17Cap55 will square Trump's natal Jupiter, so strong via its Stationary condition as part of his Neptune-Chiron-Jupiter trio of speculation and grand schemes. This square denotes potentials for that 'down on his luck' feeling (such a martyr!) as Big T's goals and dreams are challenged or limited by responsibilities and/or by authorities--perhaps, legal eagle Saturn will finally demand accountability if he (Mr. Mueller) hasn't already! The three exact 'hits' perfect all through 2019 on: February 25, July 6, and November 25, 2019.

And we mustn't forget the ego-deflation of transit Jupiter opposing Trump's natal Sun (@22Gem55 in natal 10th house of Career and Public Status) three times in 2019 on March 11, May 11, and October 29. Problems include overreach, depleted finances, and others who steer him in the wrong direction (as Fox News heads already do). Opposing forces restrict and principles are compromised (if he held any) during 2019.

Of course, other important transits will affect Donald Trump's natal chart during 2019, some positive, some negative, but they must be for another post or two. Hopefully, you'll stay tuned for them and for other posts to be published as soon as my schedule allows including 2019 eclipse details. And remember that your on-topic comments and shares are always much appreciated by yours truly! jc

Now here's a recent post with my considered view of some early 2019 cosmic events bwo Political Astrology through a common-good lens, plus, a link to Robert Cosmar's insightful 2019 Forecast for America via YouTube. And perhaps at or around Spring Equinox 2019 conditions will provide benefits for some if not for others! And as you know, a Spring Equinox horoscope, aka, Aries Ingress, represents conditions for an entire year and may be referred to until the next Spring Equinox which makes it the most prominent of the Cardinal Point Ingresses.