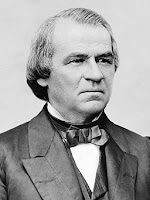 
The impeachment of President Andrew Johnson occurred on February 24, 1868 and qualifies as America's first-ever impeachment of a president. (130 years later, President Bill Clinton was impeached on December 19, 1998 although no crimes were found by the Starr investigation so Republicans impeached a Democratic president over infidelity; meanwhile some of them were busy doing the same thing--ex: New Gingrich.)

A prominent feature of a noon horoscope set for February 24, 1868 Capitol Building Washington DC is a massive Pisces line-up of planets: Sun, Moon, Mercury, Jupiter, and even Chiron. The Sun @5Pisces (the leader) conjoins the transiting South Node @4Pis59 = lack of popularity; (and with Pisces, use of alcohol is suggested) so that a T-Square pattern is formed made up of Sun-NN = Saturn (5Sag23): 'separation; disadvantages in dealing with the public' (Ebertin); 'weak influence within groups' (Munkasey); 'reserve in relationships; patience' (Tyl).

We should also note that for Andrew Johnson, born December 29, 1808, with Neptune @5Sag34 (in Raleigh, NC from where I now type at you!), the period of his impeachment was a time of transit Saturn conjunct natal Neptune, the "grim face of reality" transit--a time of disillusionment and of misinterpretation of one's responsibilities.

So for President Johnson we may substitute his natal Neptune for impeachment Saturn in the T-Square and midpoint picture it creates potentials for:

Sun-NN = natal Neptune: disappointment in associations; an inability to adapt (Ebertin); deception from allies; indecision over one's destiny; finding important secret societies (Munkasey); feeling let down by others; feeling that relationships are threatening or bothersome (Tyl).

Well, there's a mini-portrait of America's First Impeachment from a cosmic angle. Is it nearly time for another one?