Below is a tri-wheel view of all three Jupiter-Pluto Conjunctions of 2020 which perfect on April 4 (center), June 30 (middle), and November 12 (outer); all charts are set for the Capitol Building Washington DC. Notes are scribbled on the chart/s if you care to view them although I didn't squoosh as many as usual since there simply isn't space on a tri-wheel but most of the basics are there: 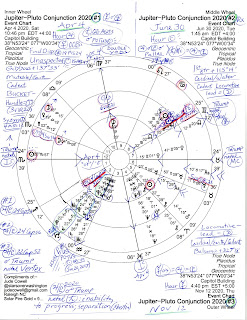 Jupiter-Pluto Conjunctions 2 and 3 (June 30 and November 12) both fall within the difficult 4 North Series with themes of 'restraint; restriction; illusions; inhibition; separation; events occur that block progress; misjudging strength or the situation; caution advised until eclipse influences pass'. A 4 North eclipse last manifested @20Gemini (conjunct Trump's natal North Node and Sun, and US natal Mars) on June 10, 2002 while Cheney, Dubya, and the rest of the "1% Gang" of war profiteers were readying their ill-advised, misguided invasion of Iraq intended to stir up the hornet's nest that is the Middle East and act as another signpost on the road to the 'new world order'. As you see, US natal Pluto is penned upon the chart where most of the Jupiter-Pluto action occurs--in 2nd hou$e of the April 4th chart with the Cancer-Capricorn axis intercepted across the 2/8 which adds to the picture heavy karma which must be dealt with if any beneficial progress is to be made.

Potentials which may express from the blended energies of Jupiter-Pluto include 'extreme depletion of resources', 'criminal elements with great social influence' (ex: gangster Trump), 'official corruption', 'moral laxity within society', and/or 'the destruction of legal documents' (Munkasey).

Jupiter and Pluto as Apex Planets in Midpoint Pictures

Also of interest in two of the charts are midpoint pictures pointing directly toward Jupiter and Pluto--in the June 30 chart it's growth-hindering Saturn-MC = Jupiter with potentials for: 'changing fortunes and/or changing residences'; with Pluto add: 'a struggle ordained by destiny' and/or 'success attained under great difficulty'.

Then the November 12 chart shows law-suit-filing, politics-debating Mercury-Mars = expansive Jupiter with potentials for: 'constructive criticism, sound judgment, success, a good critic, and/or a celebrated orator'. Add powerful, wealth-hoarding Pluto and we may have 'a sharp analyst, an over-zealous orator', and/or 'suffering heavy attacks or assaults'. (The Combination of Stellar Influences, R. Ebertin).

So there's my basic overview of the Jupiter-Pluto Conjunction/s sans other considerations such as the Great Conjunction of Saturn and Pluto @22Cap46 which opens Year 2020 (January 12)--with two of the planetary pairs conjoining near or conjunct the fated Vertex of Donald J. Trump. The exception: Jupiter-Saturn conjunct @00AQ29 which ends 2020 (on December 21--Winter Solstice)...but it directly lands upon America's POTUS Sun so it too relates to Donald Trump. Arggh!

Yet after all, the yoke that is Donald Trump gives the American people a tremendous opportunity to work through the negative, destructive, cruel energies of racism that have smoldered under the surface of our society, then frequently erupted off and on, since before the founding of our nation in 1776. And if we manage to succeed at this Great Task, and if social and economic inequalities are positively dealt with, our Republic will become even 'greater' than a mean one such as Trump could ever imagine in his wildest Mercury-square-Neptune fantasies.