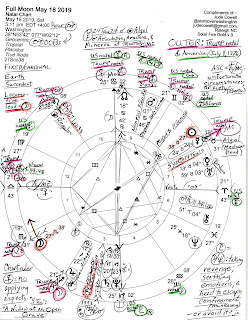 Image: Full Moon @27Sco38 May 18, 2019 Washington DC falling across the 2/8 (Taurus-Scorpio) axis of money, possessions, values, Corporatism and Big Business. Some forms of awareness, relationship concerns, and culmination or fulfillment are indicated. This Full Moon cycle began with the New Moon @14Tau11 of May 4, 2019 which conjoined our US Inaugural Ascendant (Oath of Office) traditionally held on January 20th every four years. And since the boogeyman who haunts our nightmares, Donald Trump, now plays the POTUS role, we can expect both May 2019 lunations to relate specifically to his nibs (and therefore to America since he's our 'rep', allegedly).

Chart-ruler Venus (in 7th house spotlighting relationships and legal actions) is happy and luxury-loving in her own sign of Taurus--moved beyond separative Uranus, yet Venus has no applying Ptolemaic aspects which emphasizes her sign and house position. So Venus rules 1st house but also the 8th house of Corporatism, Debt, Credit, Insurance, Legacies, Shared Resources, Transformation, and the Occult. Penned on the chart you see Venus and Uranus conjoined by a transiting asteroid, inquisitive Pandora, whose sneaky actions tend to bring unintended consequences which can trip up the most well-laid plans when least expected.

So as we see, ideas and plans (for growth: Taurus) were seeded early in May around the New Moon--are they now near fruition? Taurean leanings toward withholding, greediness, and intolerance may also be expressed as various lawsuits proceed. plus, New and Full Moons can sometimes affect conditions in disruptive Uranian fashion similar to eclipses with major changes and turns of direction occurring unpredictably. Obviously, various testimonies before Congress are in play this month--or not, since Uranian Trump tries to thwart them--from Robert Mueller, Don McGahn, and perhaps other political players, yet the specter of money and currency issues cannot be ignored (2/8; Taurus-Scorpio) particularly given Tweety Trump's recent messing with global markets via his tariff threat toward China and the fact that such tariffs are actually taxes on the American people.

Because in spite of how Trump propagandizes, China doesn't pay his tariffs, we do. And with that I request that you enlarge the image and attempt to read my messy astro-notes penned on the chart as you wish.

Also note that this Full Moon perfects during a Mars Hour and Mars @1Can46 is out-of-bounds (OOBs) of the earthly plane, off doing who-knows-what, and here, conjunct sad Orpheus. Unfortunately, arson cannot be ruled out when Mars is in Moon-ruled Cancer--especially when OOBs--for emotional control by victim and perpetrator alike is typically lacking.

Now around the Full Moon chart are Trump's natals highlighted in pink; most of America's natals (July 4, 1776 5:09 pm LMT) are in green. Trump's first planet/s to rise - his Neptune-Chiron-Jupiter trio (in his natal 2nd house of money and values; Jupiter-Neptune = speculation, inflation, and big promises) and note the pile-up of asteroids (listed, upper center) upon Trump's natal Midheaven where Full Moon Mercury @24Tau24 points toward Trump's Algol-laden Goal Point (MC) as it did during the infamous June 9, 2016 meeting at Trump Tower between Donald Junior, Manafort, Kushner, and the Russians. On that day, meeting and negotiating planet Mercury, The Messenger, was opposed by a strong Mars in Scorpio denoting rash actions leading to negative consequences.

And given the turmoil and chaos of a Trump White House, perhaps on that unfortunate result we can all agree.