Astrology of an American Constitutional Crisis

May 9, 2019: The Trump-GOP Alliance Sparks a Constitutional Crisis

Once Trump was installed in the Oval Office by shady operators both foreign and domestic, we discussed the symbolic Progressed New Moon of the US Constitution. Today many voices call constitutional crisis which is precisely one of the things Trump and his backers had in mind all along, as previously stated multiple times here on Stars Over Washington and elsewhere across the interwebs. This very day Speaker of the House Nancy Pelosi agrees that such a crisis is, in fact, the case due to Trump's refusal to honor his Oath of Office.

And with the secreted Mueller Report as sketchy justification for GOP action and non-action (ex: Trump's assertion of executive privilege to stop various testimonies), such a crisis is in plain view for all but the most ardent Trump worshipers who apparently are fans of sabotaging our nation's three co-equal branches of government meant to keep an eye on each other as the Founders intended. And it seems that weakening the US Constitution and our Congress are 'necessary' steps on Trump's and the GOP's rocky road to authoritarian dictatorship--with a GOP-packed SCOTUS depended upon to further their draconic aims. Even powerful Pluto 'agrees' as he creeps through Saturn-ruled Capricorn on his way toward America's first-ever Pluto Return/s in 2022 for Pluto in Capricorn suggests "the dictator" according to Reinhold Ebertin.

One of the anti-constitutional arrows in the GOP quiver is to call for a Constitutional Convention so that saboteurs can tinker away on the document and undermine its concepts which for over two centuries have made America 'great'. How ironic for MAGA heads, isn't it? But if or when Trump's remaining dupes ever realize his true aims, it will be too late for America.

And so, the squeaky wheel that is Stars Over Washington is compelled to present yet another posting of the US Constitution Horoscope set for September 17, 1787 4:00 pm LMT (approved and signed) Philadelphia, Pennsylvania. Highlighted in green around the chart are scribbled today's planets -- as you see, transit Mars now conjoins US Constitution's ('USC') Jupiter (25Gem22) denoting the energetic pursuit of goals, tr Mars also squares USC's Sun (24Vir49 conjunct 1787 Nemesis) activating an urge to fight, and tr Uranus sextiles USC's Mars (3Can05) which calls out those with iron wills for a period of problem-solving. Sorely needed in the most positive way possible. 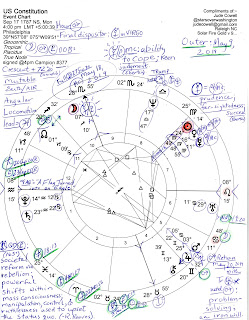 In USC's Secondary Progressions (not shown) we find a YOD pattern of crisis, a turning point, and karmic opportunity with a Neptune-North-Node sextile at base which points toward USC's progressed ('SP') Venus which happens to conjunct US natal Moon (We The People; @27AQ). On its own, the Neptune-NN pair itself indicates such things as cheaters and other anti-social elements in society along with a lack of community or team spirit and if we add SP Venus as apex of the YOD, plus, our natal Moon and we read the result as a midpoint picture, we have potentials for: wrong liaisons, unfaithfulness (ex: treason), misconceptions about certain relationships, disappointments, and a lack of community spirit, according to Ebertin.

As for a constitutional crisis (and the timing thereof) we may look toward a 'cosmic time link' Solar Eclipse which counts as the Prenatal Solar Eclipse in the US Constitution's Secondary Progressed chart timed for the moment the document entered its symbolic 3rd Quarter phase (the 'crisis in consciousness' stage) on February 28, 2017, just after Trump's Oath of Office was taken (apparently with his fingers crossed behind his back). USC's SP 3rd Quarter Moon @12Sag22 squared its SP Sun 12Pis22. In real time, this Solar Eclipse manifested on January 9, 1777 @19Cap50 in the 13 South Saros Series with themes of: constitutional crisis and striving for group endeavors either positively or negatively (Brady). A 13 South eclipse last occurred in 2011 and will next occur in 2029.

Naturally, during the American Revolution, several historical events took place in 1777 under the Saturnian rays of the 13 South Solar Eclipse in Capricorn (19Cap50--where transit Saturn today, and recently Pluto, have trod) and you may wish to check out the year's Wiki page for a list. A few such events include January 2, the second Battle of Trenton (Washington repulsed a British attack), January 3, the Battle of Princeton (Washington defeated Cornwallis), January 15, Vermont declares independence from New York and becomes the Vermont Republic until 1791 when it became the 14th state, June 13, Marquis de Lafayette lands near Charleston, SC to help train the Continental Army (Thanks, France!), and significantly, November 15, 1777 when the Articles of Confederation and Perpetual Union were debated and approved, ratified on March 1, 1781--then replaced on March 4, 1789 by the current US Constitution, the one we'd better be determined to hold on to lest Trump chew it up and swallow it down.

A related post: Defend the US Constitution on November 6, 2018!

Note: the US Constitution Horoscope, above, may be found in Campion's The Book of World Horoscopes, chart #377.