Assuming the gentlemen of 1789 would have begun their work around 9:00 or 9:30 am LMT, a horoscope may be set for March 4, 1789 NYC which reveals information in 2019 for comparing transits of our current day calculated--now that the US Congress is stirred to reassert its constitutionally mandated powers and duties in necessary response to Trump era challenges which are considerable, undermining, and anti-constitutional. As you know, our traditional 'three branches of government' were founded with co-equal powers and intended to act as guard dog over the other two branches yet Congress is now under threat by an Executive branch attempting a monarchical, autocratic take-over of government--implemented by an administration many would call illegitimate.

Below is the US Congress First Session Horoscope March 4, 1789 9:00 am LMT NYC--set for 9:00 am because this timing echoes the ASC/DESC and MC-IC positions in our January 20th Inauguration charts and places US natal Pluto conjunct MC, The Goal Point. Added underneath are comments concerning today's transits to the 1789 chart, plus, prominent transits in force on Inauguration Day 2017 12:00 pm est for they continue to affect the current administration and thus impact the lives of We The People: 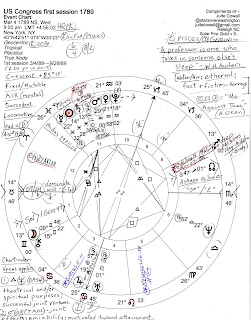 Naturally, Neptune, Pluto, and Chiron were unknown in 1789 but in 2019 they are not. Please enlarge the image to read basic chart information messily penned on.

So here we have a founding chart for the US Congress with a few notes on today's transits and those of the Trump administration in effect for the (assumed) 4 years of his tenure as he challenges the power of the US Congress and obstructs the ability of Congress members to fulfill their Oaths to the US Constitution and thereby to perform their duties on behalf of the America people.

As always, your on-topic comments concerning this post are welcomed and your Shares are much appreciated! jc

Email ThisBlogThis!Share to TwitterShare to FacebookShare to Pinterest
Political Astrology,Astrology,Politics March 4 1789, mundane astrology, political astrology, US Congress, US Constitution, We The People