Having just watched the PBS American Experience documentary Woodstock I can gladly recommend the presentation to any reader interested in "An Aquarian Exposition: 3 Days of Peace and Music" put on by, or rather for, my own 'Flower Power Generation' within an alfalfa field in Bethel, New York starting August 15, 1969. As you know, we now approach the festival's 50th anniversary so a brief consideration of Woodstock's Solar Return 2019 Horoscope could make for interesting comparison along with its Mercury Return 2019 since the (symbolic) horoscope set for August 15, 1969 at 8:00 am edt Bethel, NY shows chart-ruler Mercury rising @13Vir41--Mercury, the planet of young people exalted in its own sign of earthy Virgo. Mercury the Messenger also rules the Midheaven as you see, and yes, a lot of exaltation went on there that weekend along with rain and mud!

A much-needed message of peace, harmony, and love was delivered to the world as well perhaps inspired in part by Woodstock's Prenatal Eclipse ('PE') in creative Pisces (27:25) in the 7 North ('7N') Saros Series with themes of: creativity, passion, lust, and birth (Brady). Yes, babies were born and apparently some were created! The passionate PE is marked in the 7th house of Partnerships and parallels happy Jupiter in music-loving Libra in 1st house (parallels are similar to close conjunctions).

Now on another of my several blogs in 2009, a few Sun-Moon blend astro-notes (on the occasion of its 40th anniversary) were posted covering August 15--August 18, 1969 if you're curious about the cosmic weather of the 3-day festival which one lady in the PBS documentary, linked above, perfectly describes as, "A mark in cosmic time." Naturally, more details about The Aquarian Music Festival of 1969 may be found on its Wikipedia page yet curiously, there were no planets traversing futuristic Aquarius during Woodstock 1969. Seems as if there should've been, don't you think?

Anyway, generationally speaking, we should mention that Woodstock 1969 occurred close to three years after the Flower Power Eclipse of November 12, 1966, a Total solar eclipse with a 'Cosmic Peace Symbol' of planets to its credit (drawn on the chart)--but the eclipse activated a negative or malevolent degree in Scorpio (19). To me this suggests a Scorpio-death connection with the Vietnam War, a travesty of horror of the era that I and my Flower Power peers protested against and which may be seen again in the Woodstock 1969 horoscope, below, via Mars the Warrior conjunct IC (The Basis or Foundation of the Matter; Endings) and conjoining violent Antares, a star of war and anti-war. And in August 1969 Mars (young males of draft age) was in Sagittarius, sign of foreign lands, foreigners, and long-distance travel. Some young American men went to Canada, an act for which I personally have never blamed them.

So! Enough of my peacenik remarks.

Below is the Woodstock 1969 Horoscope and note that the festival's Solar Return 2019 Chart perfects this year on August 15 but its Mercury Return won't perfect until September 5, 2019 with rebellious Uranus Rx in Taurus conjunct Return Midheaven ('MC" = the Goal Point) and North Node (future direction; public contact) @15Can57 in the 12th house of Politics, Karma, and Self-Undoing--and conjoining and pointing toward the natal Ascendant of our nation's horrific 'death star', The Pentagon, one of the major sources of all our troubles: 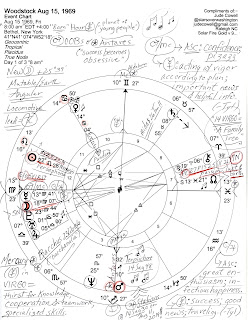 Please Note that if you follow the above link to the Vietnam War Horoscope you'll see that the war's Jupiter (the General) was unaspected in the chart and the notes for this condition (penned on) could very well describe a certain bone-spurred draft dodger under whose misbegotten administration the American people and the world now suffer--why him? Because the war's Jupiter @23Tau28 sits atop Trump's natal Midheaven where enraged star Algol reigns.