December 19, 2019: With Christmas celebrations around here today my blogging time is brief but I shall post below a DC Horoscopes tri-wheel with Trump natal in center, the July 2, 2019 3 North Solar Eclipse in the middle, and last evening's Impeachment of Donald J. Trump timed for 8:09 pm est when the Vote was first called for. Circled are significant contacts between his natal (unaspected) Pluto @10Leo02, the 3 North Eclipse's Midheaven @10Leo04 (chart set for Washington DC, Sun-Moon @10Can37 in the midst of America's Venus-Jupiter-Sun trio), and last night's Impeachment Vote Ascendant @10Leo04.

UPDATE Dec 20, 2019: excerpt from my previous post on current transits to the Republican Party's natal planets: Republican Party Horoscope "July 6, 1854 5:00 pm LMT (Sun 14Can27 Mercury 10Leo05; Moon 28Sco00 ) Ripon, Wisconsin" to note that Mercury @10Leo05 is also pinged by Trump's natal Pluto, eclipsed by the 3 North Solar Eclipse of July 2, 2019, and was rising with Trump's Pluto when the Impeach Vote was called for at 8:09 pm est on December 18, 2019. A significant midpoint picture thus formed denoting an intense desire to 'control information, its sources, and its dissemination' (Mercury-Pluto = ASC; Munkasey). Ruthlessness toward hiding secrets was and is involved.

Apparently the Cosmos is playing peep-eye with Underworld 'god' Pluto, Trump's hidden-in-12th-house planet of underworld mobster connections via its degree and symbol. Rounding up we have Pluto-MC-ASC: "11 Leo" = "Children on a Swing in a Huge Oak Tree...negative expression: laziness exalted as a virtue." Its Illumination Point (opposite degree/symbol) is "11 Aquarius = "Man Tete-a-Tete With His Inspiration"...negative expression: complete self-obsession." (Jones). 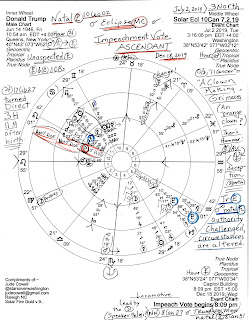 And btw: Putin is boasting and laughing at what a Russian agent Trump is. Which means that in 2020, a vote for Trump is a vote for Putin. Check out Malcolm Nance on The Stephanie Miller Show for details.