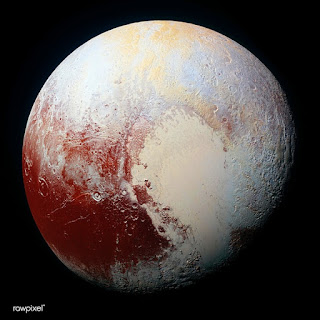 December 8, 2019: In the year 1930 a lot of stuff occurred in the US and across the globe including debuts of Mickey Mouse, Loony Tunes, and the Discovery of Pluto (named after Mickey's dog, Pluto--wait! it's the other way round!). Also in 1930 were two Solar Eclipses which repeat in 2020 in the 4 North and 4 South Saros Series.

However, 1930 eclipses repeating in 2020 are actually topics for another post because first we should consider the last Solar Eclipse of 1929 in the 3 South Saros Series for we're about to fall within its field of influence (up to two weeks before the eclipse date) on December 26, 2019 so once again its themes are on society's cosmic calendar, my friends, and their solar vibes stretch into 2020. Manifesting on November 1, 1929 @9Scorpio, the previous occurrence of 3 South is the Prenatal Eclipse of Pluto's discovery. And as you know, Pluto is associated with the sign of power, research, spying, and intense brooding, Scorpio, yet Pluto's discovery degree is in Moon-ruled Cancer, as noted, below.

Revealingly, Ebertin says Pluto in Cancer is 'the magician' while Pluto in Capricorn is 'the dictator' so here we are from Moon-Pluto vibes to harsh Saturn-Pluto indications which culminate on January 12, 2020 @22Cap46 (conjunct Trump's natal Vertex 22:51).

Now when it comes to late 1929 and 1930, it's only natural that astrologers and astronomers alike immediately think of Clyde Tombaugh's confirmation of the discovery of Pluto on February 18, 1930 from photographs taken in January with Pluto's Tropical position at his debut @17Can46 Rx. Note that this evening as I type, transit Saturn @18Cap48 is done opposing 1930 Pluto off and on since February and March 2018. This denotes a period when authority challenges power and it's an unfavorable time to attempt manipulation of circumstances for personal advantage. Sound familiar like a political election scheme involving Ukraine? Well, this transit has affected any or all the realms that astrological Pluto rules such as political and financial power for Pluto's discovery horoscope is its 'birth chart' and transits to, and progressions of, the chart are attached intrinsically to Pluto's meaning--at least for those who use the lens of Astrology to study societal issues and topics which must unfortunately include atomic and nuclear concerns, the criminal elements of society, plus, ultra-wealthy culprits who wield hidden control. We can also mention that Saturn @8Cap57 in the Discovery Horoscope of Pluto was activated three times recently, all in 2018: on April 2nd (with Mars conjunct Saturn), May 3rd, and December 10th, a time of accountability and reckoning.

And now that transit Pluto in Capricorn opposes its past position in Cancer, most people (if they're paying attention to current events at all) can feel the titanic power struggle ongoing above our heads--or perhaps 'below the surface' is more appropriate for subterranean saboteur Pluto's deep, transformative effects occurring at a structural and cellular level.

As for the eclipse themes we're facing now via the 3 South Solar Eclipse of December 26, 2019 @4Cap06, we'll be dealing with concerns into 2020 such as 'sudden endings of associations', 'traumatic transformation through news received or short journeys undertaken' (Brady), plus, issues of our relationships to authority figures (a la Capricorn and Saturn in Capricorn--not good for markets) which must necessarily include government, law, investment, and business in general.

Now if you wish, check out a list of Events of 1929 in the US where the Inauguration of Herbert Hoover and the "Black Tuesday" Crash await you and be daring--for history doesn't always repeat but it does quite often rhyme.

Above image: Pluto without his cloak of invisibility

I get the feeling that a massive earthquake will take place throughout America.
This Sun, Venus and North Node Capricorn says it's time to burn it down to the ground.

Thanks for your insight and wisdom.
Cheers.