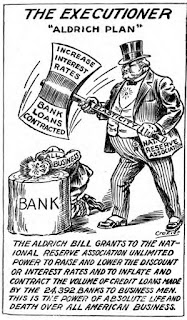 January 22, 2020: Ordinarily the topic of the transpersonal Neptune-Pluto pairing here on Stars Over Washington has had most to do with the Robber Baron Class of the late 1800s and its biological and ideological spawn who continue to bedevil society. But now that organized crime in the form of global and domestic criminal networks and syndicates are running America from the White House, let's consider in this post the planetary pair in its criminal underworld capacities which include drugs (use/abuse, trafficking, etc) and occult practices.

(As implied by the image, the US Federal Reserve as part of the world banking system falls into the syndicate category as well and some would call the big banksters and their operatives a criminal enterprise, perhaps of the fox-guarding-the-hen-house variety and worse. Perhaps you disagree, but there it is. And note that in Astrology, Cupido can signify The Syndicate, The Family, and/or Corporatism with 'The Family' suggesting the Mafia and/or the 'religious' group that focuses on gaining political and worldly power as detailed in Jeff Sharlet's book, The Family and dramatized on Netflix. This group holds the annual 'National Prayer Breakfasts' on Capitol Hill, you know.)

Neptune-Pluto: Mired within Their 492-Year Cycle

Neptune-Pluto = Uranus: peculiar discoveries; flair for the unusual, mystical, supernatural, and/or adventurous; hyper-sensitive nerves; disruption to gain recognition; adventurous ego thrust; making waves to get to shore; possibly aberrant behavior; courage; adds to impersonal attitudes about any destructive or antisocial activities; emphasizes unusual means to escape from or change reality; rebellion against artificial supports or pursuits; tendency to go to extremes with drugs.

More Neptune-Pluto information can be found in Michael Munkasey's Hegelian Dialectic analysis of the pair (create the chaos then solve it the way you intended in the first place):

Other inferences can be made about the pair working together as well: idealism, laxity, merging, vagueness, disappearance, disguise, thievery, loss of Neptune combines with Underworld 'god' of Hades Pluto's tendencies toward extreme wealth, stealth, and death (hidden hand Pluto, the Secret Assassin, the dragon, etc). Both planets are slow-moving and thus karmic in that reap what's been sown kind of way.

Now my suspicion is that you recognize Trump and Co. and his foreign pals snuggled within many of these potential descriptions and possibilities. And we should note the Solar Eclipse Saros Series containing the last conjunction of Neptune and Pluto on April 30, 1892, for their conjunction occurred a mere 4 days after the Total Eclipse of April 26, 1892 in the 2 Old North series. And curiously, 2 Old North happens to be the Prenatal Eclipse series of Donald Trump which repeated on July 12, 2018 @21Cancer near his natal Saturn and Castor, a star with potentials for fame, loss, crippling of limbs, mental illness, and/or murder (A. Louis). See what Donald was up to and where he was on July 12, 2018 in this handy Timeline and note that also on that date, Robert Mueller indicted 12 Russians for hacking Democrats (to help 'elect' Donald).

And of course you know that Trump's natal Saturn @23Cancer is under stress now from transiting Saturn in Capricorn--opposes his Saturn, in fact, which Saturn, planet of accountability, precisely did on the morning of January 21, 2020--the day his Senate Impeachment Trial got underway. Now so far I haven't heard any obvious mention during senate proceedings of organized crime but my suspicion is that many if not all of our senators have had dealings of one sort or another with underworld figures, foreign and/or domestic--other than dealings with Trump and Co. Oppressive dealings such as blackmail and physical threats, it appears to me.

But what say you--any thoughts come to mind regarding Neptune-Pluto concerns?

Related from 2009 is Robert Scheer's article Wall Street Robber Barons Ride Again included here under the auspices of 'the new boss same as the old boss' adage although admittedly, Trump and Co. have taken the fraud level to a whole new and sinister depth while splashing it in our faces. Also related: The Natal Horoscopes of Capone-Manafort-Trump.

Sources used but relatively unharmed in the creation of this post: Midpoints: Unleashing the Power of the Planets, Michael Munkasey, Solar Arcs, Noel Tyl, The Combination of Stellar Influences, Reinhold Ebertin, and for Castor: Horary Plain and Simple, Anthony Louis.