August 2, 2018: Now that the tweeter-in-chief has compared his former campaign chairman Paul Manafort with Chicago gangster and tax-dodger Al Capone you know a comparison between their natal horoscopes had to occur. Below is a bi-wheel with Capone's C-rated natal chart in the center and Paul Manafort's 'noon' chart, outer. Penciled around the charts are some interesting links between Al Capone's planets and those of Donald Trump. As you see, Mr. Trump's Sun-NN-Uranus trio opposite his natal Moon-SN is prominently showcased on Capone's natal MC-IC axis: 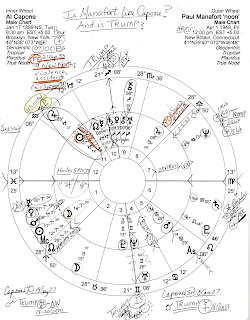 Plus, you see that Manafort's natal Saturn 00Vir04 Rx conjoins royal star Regulus (success if revenge is avoided)--and conjoins Trump's natal Ascendant and, by extension, his rising Mars in Leo. This link suggests that Manafort will 'stick' (Saturn) with Trump (ASC) and not turn state's evidence, even if convicted, but we'll see since 69-year-old Manafort's prospect of dying in prison may be a prison cell too far.

Also note that Al Capone's Syzygy Moon is his Prenatal Eclipse ('PE') 21Cap33 in the violent 9 New North Saros Series (conjunct Trump's natal Vertex!) and is the same series as that of Alexander Hamilton's PE, as already discussed.

Now here's a brief bio plus the natal chart of Al Capone if you wish a peek at his chart without my scribbles. And of course The Tower Eclipse of August 11, 2018 is affecting events already and may have much more to 'say' about the whole sordid mess--or in quick Uranian fashion may put an end to it!