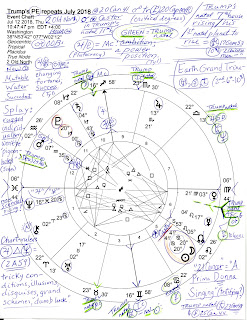 Basic chart details are penned upon the image (exs: Mars out-of-bounds, Hour of Jupiter; Jupiter and Neptune chart-rulers trine one another--see lower left), and marked in green are Trump's natal planets and angles. Pluto @20Capricorn opposes the eclipse with both at critical-crisis degrees (20Can-Cap) across the 5/11 axis; the Sabian Symbol of the eclipse degree rounded up '21Cancer' = "A Prima Donna Singing' and notated, lower right, is "A Prima Donna Singing" since Trump's name is Don, of course, and today everyone continues to wonder if Trump will 'sit down' with Special Counsel Robert Mueller and 'sing' about his involvement with Vladimir Putin and Russian oligarch funding of his 2016 campaign. And answer Mueller's questions on obstruction.

This eclipse chart is infused with Jupiter-Neptune, the speculation/grand schemes pair and, as you see, Trump's natal Neptune-Chiron-Jupiter trio is in 7th house of Partnerships (in Washington DC; but in his 2nd house natally) and the midpoint of the Plutocracy pair of Jupiter and Pluto graces the Midheaven denoting those in power positions with great ambition to succeed. At apex of the Jupiter-Uranus midpoint is Mars Rx OOBs, well-hidden in the 12th house of Politics, Karma, and Self-Undoing and conjoined by the transiting South Node, a Saturnian point of separation. Mars-SN has a military ring to it (Trump's Mars and Pluto in Leo, plus his natal ASC, are in the 6th house of Military, Police, and Civil Service), and describes loners who act upon their own decisions without regard to the opinions of others--and may be out-of-step with societal norms. Plus, transit Mars opposing Trump's natal Pluto (10Leo02) indicates a period of hostile forces lined up against him and a lack of control on his part to affect outcomes--a karmic condition is indicated (reaping what's been sown).

Eroding Neptune in shady Pisces rising in the 1st house of this chart suggests conditions continuing such as scandals, deceits, cover-ups, leaks, disappointment, and loss, even thievery. Large water events such as flooding are also possibilities, along with plenty of tears--especially for those under Trump's watchful raptor's eye, aka, most anyone who isn't wealthy or famous. That his Prenatal Solar Eclipse now repeats as it does every 18.6 years spotlights the themes of his 2 Old North Saros Series, as noted above, and we'll soon see how significant, if at all, they become regarding events in his life. Of course, Trump's cruel policy of separating children from their parents at the border has already followed the eclipse's 'separation' theme--and this done for the political purpose of snagging the billions of dollars he demands in order to allegedly build a border wall. Yet I still wonder if he thinks he can keep a bunch of the money for himself!

Well, there are many other chart factors of note in this eclipse chart but it will soon be July so I'll close this post now and publish it this evening. Complaining about Trump and his anti-government handmaidens like eugenics-booster Stephen Miller does take a toll yet hopefully later in July my surgery sagas will be over and we can discuss more interesting topics than the fearfully misguided, anti-social administration run by autocratic Republicans and the orange-haired mascot they hope to hide behind in November.