January 26, 2020: Spring 2020 approaches in the Northern Hemisphere and in case you've missed it, an excellent video from Secrets of the Universe is Astronomy Calendar 2020 which provides a Timeline of 2020 astronomical events including supermoons (a term coined by master astrologer Richard Nolle of AstroPro fame), the Halloween 'blue moon', the year's meteor showers, equinoxes, solstices, and 2020's Solar and Lunar Eclipses (those disruptive 'wild card' 'cosmic blinks' earthlings feared in ancient times). 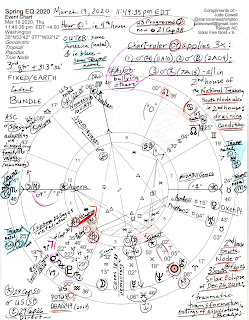 As you know, a Vernal or Spring, (aka, Aries Ingress) Equinox Horoscope is 'good for' an entire year so let's briefly consider the upcoming season and its horoscope set for Washington DC in an attempt to glean via a 'common good lens' any Political Astrology clues concerning the year. However, we should note that until March 19, 2020 at 11:49:35 am edt, the Spring Equinox 2019 Horoscope remains in force with its Virgo Moon rising.

March 19, 2020 11:49:35 am est Washington DC is an Hour of the Sun; Sun conjunct Aries Point in 4th house of the Homeland, Real Estate, Domestic Scene with the Sun posited on one side of the 4/10 Security axis. Voicing We the People's desire for freedom and equality, Moon @13AQ32 in 3rd house of Communications conjoins transiting Icarus, an asteroid/archetype which is sometimes associated with assassination and always with 'flying too high'. And as always, the Aries Point is a Cardinal World Point of manifestation so global influences are involved which include potential conditions of anarchy, rebellion, and resistance.

Rising, yet possibly of no influence in Washington DC, is a Southern Hemisphere star Agena (Beta Centauri: 'the pain of learning'; 'sacrifices'). I mention because the star is rising.

Curiously, ASC 24Sco46 = Trump's natal IC (Endings--will he 'go back where he came from'? "25Scorpio" = "An X-Ray"). As you know, intense, brooding Scorpio is ruled by Mars and co-ruled by the power-craving planet of stealth, Pluto, 'god' of the Underworld, hidden wealth, and string-pulling. Therefore, the criminal underworld/syndicate, gangsterism, and battles for control and supremacy are suggested. Meanwhile, secrets will continue to be revealed, sometimes for the sake of revenge. In 2nd house, the 3 South Prenatal Solar Eclipse of December 26, 2019 ('traumatic transformation; and/or ending relationships'--Brady) continues to haunt society for here we see 3 South @4Cap06 entering the 2020 cosmic picture by way of the separative South Node @4Cap30. Opposite are North Node conjunct America's Venus-Jupiter-Sun Cancer trio in the Corporate 8th house which implicates matters of finance, investments, debt and credit, corporate power, and our POTUS Sun of leadership (July 4, 1776).

Suggestive of how things will proceed during Spring 2020


Chart-ruler Mars (in 2nd house of the National Treasury, Earning Ability, and Values including currency issues) applies three times: 1. conjunct Jupiter 0A10 (expansive or exaggerated conditions, large plans and projects); 2. conjunct Pluto 2A04 (a fated task, jealousy, revenge, a large project, forging weapons of war); 3. conjunct Saturn 7A15 (obstacles limit progress, timing issues, work associated with authority, giving more credit than is due, and positively--improvements in finances and/or social status). These are some of the potential outcomes in relation to 2nd house Mars as chart-ruler of the Spring Equinox 2020 Horoscope set for Washington DC.

Well, this is my brief consideration of the horoscope with its sparseness most likely necessitating a future update or second post. You'll spy other factors in the chart so please leave your on-topic comments with this post and Share if you care to encourage more such SO'W efforts! jc

If you include Eris at 23 Aries 36 it forms a Thor's Hammer from the square to Mars/Jupiter straight at the mid-heaven... I do think angry women will have something to say in the coming year!

Thanks for adding Eris to the picture Heartfelt! I've been studying the goddess of chaos and strife but don't feel comfortable yet mentioning her influence although I don't know why since Big T basically expresses her negative influences almost every time he opens his vengeful mouth. :( Jude

I have also given some thought to Xena/Eris and I think her original name of Xena hints at her higher vibration of "having a conscience" and "going back to make things right" but as Eris in Aries at the moment I expect "chaos and strife" is more what we are getting...

How do you think this might relate to the country's Pluto return?

Hi and Thanks Ostrova! Actually everything relates to US natal Pluto (27Cap33 Rx oppo US natal Mercury Rx--but also relates to their positions in the August 2, 1776 chart when the DoI was finally signed with signing Mercury Direct. As for the Vernal EQ 2020 horoscope I'd look at transit Pluto @24:40 for 'he' is quite within orb of the US Pluto position (3 Pluto Returns all through 2022) and as you know, this will become a stronger influence as we approach 2022. Expect a few similar conditions from the 1776 era for more clues.

Then there's Saturn @29Cap50, a critical 29th degree--eager to enter AQ and conjunct the current position of US Secondary Progressed ('SP') Pluto. Power and abuse issues, problems with and through 'authority figures' as we're already experiencing via Trump, his enablers and co-saboteurs. And to me the powerhouse of planets in 2nd house of the National Treasury and other Money Matters represents big plans and projects, global corporations, big actors, wheeler-dealers, and large organizations, both benign and sinister. Add the Jupiter-Pluto and Jupiter-Saturn conjunctions in 2020, plus the Saturn-Pluto rendezvous now separating but still holding force and we have a recipe for the start of new Social, Financial, and Religious Orders, for the 1776 order is passing away. Even Mars is on the 2nd house scene to activate and fuel as is the Tail of the Dragon, the South Node, implicating a return to olden ways and methods - so karmic - even while 'the new' is in vogue. A gang! (Plus, Pluto does like to renovate and rejuvenate where possible.) On another level, Saturn-ruled Pluto, god of the Underworld, is under, and is applying, heavy pressure and is thrilled with Trump's 12th-house unaspected Pluto in egotistical Leo. And that's why I tend to describe him as a man overshadowed by shadows.

Obviously much more may be said about Pluto and your question as 2020 grinds on so I hope you're a student or practitioner of Astrology because I'd like to hear what you discover! Jude