Tiger by the Tail, a 4 North Eclipse, and A World in Crisis 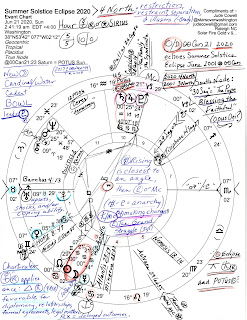 But that was before the CoronaVirus ("COVID-19") crisis stepped into the spotlight as a global contagion and now we find that a vicious, deadly assault upon civilization has begun. Plus, a cruel new phase of cyber war has been launched and threatens various institutions, industries, and organizations, both medical and otherwise. Nothing new, just more problematic for ill patients and the doctors and hospitals who treat them.

Are hackers susceptible to COVID-19? Of course! Everyone is.

That the horoscope of the June 21, 2020 Solar Eclipse @00Can21 in the difficult 4 North Saros Series casts a different hue upon 2020 events when the chart is viewed in hindsight is understandable so perhaps a few chart factors should be brought forward here. As noted in my previous post, 00Cancer00 is a critical degree and a Cardinal World Point of manifestation and recognition where global events can occur and come to light. If we wish to include in the eclipse picture Betelgeuse at the end of Gemini, we can add the star's keywords: fevers and/or acute illnesses.

Now obviously, all eclipses are known as 'wild cards of the Universe' and 'cosmic blinks' that tend to disrupt the even flow of earthly events and have long been seen as omens of catastrophe. However, in modern Astrology, most astrologers prefer to say that they presage a variety of events both negative and positive, and yes, they disrupt lives and place us on new paths much as erratic Uranus can do--usually while uncovering inconvenient facts, secrets, and scandals in the process. (And their background influences are active during historical events.) So as you know, a particular eclipse's configurations with other planets and points in a horoscope are all important for how its energies and themes express, plus, the presence of fixed stars, if any, must be considered for stars and eclipses work through or with one another (ex: Betelgeuse).

Eclipse Note: the previous 4 North Solar Eclipse perfected on June 10, 2002 @20Gemini--near US natal Mars--and an ill-advised war in Iraq soon followed; 4 North's initial eclipse occurred May 25, 1389 (OS) @12Gem08 with Pluto conjunct North Node @24Taurus (conjunct Trump's natal MC and enraged Algol). Plus the 1389 eclipse's doubly karmic Pluto-NN pair suggests "common destiny of a large mass of people" (Ebertin) and can be described as having a "tiger by the tail." That we have! So far from my chart studies I have to agree with Donald Trump that current viral effects may alter our lives for the rest of 2020 and beyond. My fret is that this medical catastrophe will be used to make permanent restrictive laws and regulations, even the implementation of martial law on the streets of America. You feel this too, don't you? The old 'crisis as opportunity' as they say in China. China! Or "shock doctrine" as Naomi Klein has ably informed us.

So as seen in the above horoscope, the planet of unexpected events, Uranus, rises yet positively this can also signify coping ability. And with Mars and Neptune conjunct in Pisces, a cosmic picture of infection and contagion of epidemic proportions can be seen--in the 12th house of Hospitals which in the US are now in danger of being overwhelmed by large volumes of contagious patients. That our nation's healthcare systems are unprepared for the onslaught caused by such a crisis is a circumstance that must be laid upon the door step of DC politicians, their donors, and others who have supported Republican austerity measures through the decades while snatching taxpayer monies from our National Treasury to support the foreign wars they profit from. Are these direct results of America's natal Mars-Neptune square of misdirected actions and misguided ideals? I think so although you, dear reader, are welcome to disagree.

The massive funding now under discussion in Washington DC could further weaken America's financial resources although some measure of strengthening of the economy should also occur if money is properly distributed. Meanwhile, my cynical mind wonders if this is part of the plan all along--the plan to bankrupt and collapse the USA. However, such a conspiracy theory of sabotage is beyond the scope of this post so perhaps it will be for a another day. Besides, SO'W is replete with similar theories already!

Now as you know, America was founded in 1776 with Sun, Venus, and Jupiter in Cancer and for a solar eclipse manifesting in the Moon-ruled sign of Cancer, karma is at work for we all must reap what we sow (including Donald "blameless" Trump). Additionally with a Cancer eclipse, family ties are suggested along with genetic inheritance and it's an emotional and highly receptive period when people tend to hide in their shells like crabs! Well, sheltering in place is the order of the day in March but with continued 'restrictions, restraints, separations, and illusions' to come if the themes of the 4 North Summer Solstice 2020 Solar Eclipse influence earthly events from June to late November into December 2020. And they will.

Occurring just prior to Summer Solstice 2020, you might find a previous post June 2020 Transits to the Inauguration 2017 Horoscope of interest with its focus on June 18, 2020. Plus, you'll notice in the 2017 Inauguration chart (center of the bi-wheel) that infectious Mars and Neptune were 'fore-tellingly' conjunct in Pisces! Who knew?

Then previous to June 18th, Donald Trump's 2020 Solar Return occurs with--you guessed it--a Mars-Neptune conjunction which has the transiting Saturn-Uranus midpoint sitting atop and suggesting a weakening strength or a weak condition of some kind.

But no cheers here for as I constantly remind myself: however Trump goes, so goes America. And as I've asserted many times on SO'W since 2005, America is my only nag in the race.

As always, your on-topic comments concerning this post are welcome and please share if you care or dare! jc