February 1, 2020: Yes, changes are certain to occur between today and the proposed Senate Vote to "acquit" Donald Trump scheduled for Wednesday February 5, 2020 at 4:00 pm est, last I heard. Below is a bi-wheel horoscope set for that date, Capitol Building (symbolic location), but for 4:56:10 pm est in case the vote isn't taken at precisely 4:00 pm--and because it is the moment that scofflaw Trump's natal 12th house Pluto (10Leo02) rises over Capitol Hill on February 5, 2020 (see 4th house). And wherever goes his Pluto of the Underworld goes his destructive Mars-Saturn midpoint, a picture of brutality, fury, destruction--and intervention of a higher power (Ebertin). Michael Munkasey adds potentials for, 'extreme measures against those who cannot defend themselves adequately, intense energy toward goals, and/or respected activities are corrupted'. 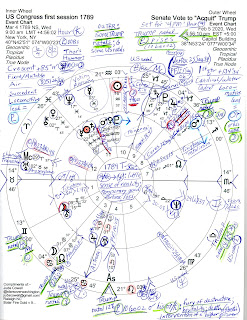 Now one consideration on the possibility of a date change is that Trump is said to be none too pleased (aka, angry) that his fake acquittal vote will come after his February 4th SOTU 2020 address so he may demand a change of date to make his boasts and gloating more timely--and he'll call his deceptive utterances "the state of the union"! Of interest in the SOTU 2020 chart and the Senate Vote chart is that contentious Mars @22Sag11/45 conjoins Trump's natal Moon (and South Node) suggesting heated feelings close to the surface, a fast pace of life, hasty actions, and the potential for temper tantrums.

The Mars-South-Node connection adds more antagonism and conflict to the picture, plus, not caring what others think or do, questioning society's militaristic values or group actions, and conduct that's out of harmony with societal norms. What else is new from Trump, right?

Well, we expect that the level of Trumpian revenge will rise as he expresses his Mars Rising energies bolstered by royal Regulus rising - he'll think he has a right to take revenge on all who've opposed him and dared to air his crimes and low character which includes anyone of either party who voted or spoke against him. However, he is not The State whether he chooses to believe it or not! And this, in spite of the caution of Regulus we've discussed many times before: 'success if revenge is avoided, otherwise all that has been gained will be taken away'. But as you know, so far Moscow Mitch has managed to protect Trump from the consequences of his actions. Yet maybe the time approaches that the "intervention of a higher force" will bring in Trump's karmic harvest and he will finally reap what he's sown. Yet if censure of Trump is all the Senate can muster, so be it, for censure will fit quite nicely with Trump's perpetually impeached condition.

After all, you see transit Saturn @25Cap36 (demand for accountability, legalities) conjunct Congress' natal Midheaven ('MC'--the goal) suggesting conservative politics but also the possibility of a fall from grace. If the latter, the US Senate's deceptive actions and subsequent failure to hold a criminal president accountable should rightly haunt them at 2020 ballot boxes across the land (Iowa votes tomorrow via caucus!). Still, Mars (conjunct-Trump's natal Moon-SN) in Congress' 8th house leads a ruthless Locomotive shape of planets, suggestive of Trump, and his determination to succeed (and retaliate).

Then as you see, Congress' 9th house of Legal Affairs (and of Foreign Lands: manipulation from a distance?) holds the powerhouse trio of Saturn, Pluto, and Jupiter with 2020 South Node nearby. And the 10th house Sun @16AQ33 nears 1789 Pluto, always a combination of energies seeking and wielding power and control. Thing is, 2020 Saturn and Pluto have already opposed 1789 Jupiter Rx (@19Can57 in 3rd house) and 2020 Jupiter soon will--exact when Jupiter reaches 19Cap57 on or about March 3, 2020, marking a peak of expansive or exaggerated energies when no one is impressed with congressional efforts--and ideals clash. Actually, I already feel unimpressed, don't you? Perhaps in part because in January I had a Jupiter Return! Or more likely because Congress is particularly missing their We the People marks these days, mostly or fully due to Republican obstructionism. Yet November 3rd approaches and a massive Blue Wave is needed for best results because GOP election rigging must be overcome!

For some levity and mockery concerning these dire topics and more check out last evening's Real Time with Bill Mahrer in a segment called New Rule: Do the Wrong Thing with Bill's advice for Democrats (some of which is on the racy side).

So as you see, there are a zillion more factors to discuss in both charts but since this is a post not a book, I'll stop fussing for now and hope that you, dear reader, might discover them for yourself, keeping in mind the 3 South Prenatal Solar Eclipse of the Senate "Acquittal" Vote and the eclipse's traumatic transformation and sudden endings of relationships themes.

And as always, please enlarge the image if you wish to read my study notes and do leave your on-topic insights and comments with this post as you wish! jc

wow you couldn't make this stuff up .gangsters paradise ..I've had my eye on Jupiter's soon conjunction to Pluto but what you have here with the 1789 chart's Jupiter shows there is way more going on .( moves into squares for the NYSE as well ) ..scary with the already vengeful nature of trump ,what is there to stop him now .

Great delineation Jude. You wrote what I "feel". November will be tough.

Things are teetering on the edge now and the 2024 eclipse will split our country again, this time East vs West. But first we have several events to navigate like the Summer Solstice 2020 Eclipse and conjunctions (yes like Jupiter-Pluto 3x starting in April). I confess it's quite impossible to keep up! Jude