Washington and Saturn-Pluto at Valley Forge 1777 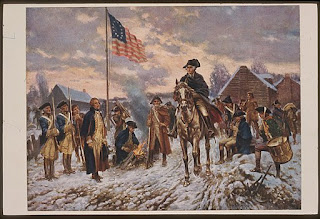 January 5, 2020: With the January 12, 2020 Great Conjunction of karmic planets Saturn and Pluto on many people's minds including my own, my senses perked up today as I read a Kindle e-book on General Washington and the encampment of the Continental Army during the frost-bitten Winter of 1777--1778 at Valley Forge, 20 miles from Philadelphia, Pennsylvania.

That's because of the book's title of Chapter Four: "Months of Toil, Hardship, and Suffering," a perfect description of those six months that Washington and his army of barefoot, starving, and ill soldiers suffered--echoed by Ebertin's description of the harsh Saturn-Pluto combination of energies.

But also potentials for: fanatical adherence to principles once they're adopted, endurance, tenacity and toughness, performing the most difficult work with extreme self-discipline, silent activity, making record efforts of the highest possible order, participation in achievements brought about by large groups of people, and, last but not least, the process of growing spiritually and mentally. Basically these are all the activities the men endured and then some--the Patriots who survived the Winter of 1777/78, that is.

And so to check out Saturn-Pluto in 1777, I reviewed a previous post concerning the 14 North Solar Eclipse which manifested on July 4, 1777 just prior to the Valley Forge encampment to see how Saturn and Pluto were configured at the time and I was rewarded by a vision of the eclipse horoscope's Thor's Hammer pattern with Saturn in Libra square Pluto Rx in Capricorn and their frustrated energies via the square pointing toward the rebellious planet of reactionary politics, Uranus @13Gemini, our nation's totem planet of war, revolt, uprisings, chaos, disruption, and revolution--and Donald Trump's guiding planet (oriental--last to rise before his natal Sun), also in Gemini and in his natal 10th house.

Therefore, please feel free to check out the 1777 horoscope for yourself--if you dare!

Is This a Haunting Solar Eclipse from 1777? because with karmic Saturn and Pluto about to begin a new cycle of activity and influence, a haunting from our past (or a rhyming with history) seems to be what the Cosmos ordered for America--because once again the time has come to fight for our freedom from tyranny.