Super Tuesday and the March-April 2020 Lunations

February 25, 2020: On Super Tuesday March 3, 2020 the greatest number of states hold primaries and a large number of delegates may be won. Looking at the entire 24-hour period, we find that the Sun (leadership) ranges from 13Pis04 (12:00 am est) to 14Pis04 (11:59 pm est) conjunct the natal Neptune of the Republican Party. And note that the Sabian Symbol for "14 Pisces" = "A Lady in FOX Fur" for which FOX News always comes to mind.

And the Moon's sign, which suggests the public mood, is Gemini for most of Super Tuesday, then Luna slips into her own sign of patriotic Cancer a bit before midnight. The Harveys, in their book Sun Sign-Moon Sign give a timely quote for the Sun Pisces-Moon Cancer blend: "Many people consider the things which government does for them to be social progress, but they consider the things government does for others as socialism." - Justice Earl Warren. Mmm, yes they certainly do.

Now as you know, voting planet Mercury is retrograde on March 3, 2020 @00Pis52 (12:00 am) and @00Pis09 (11:59 pm est). This happens to be the degree of America's Prenatal Solar Eclipse ('PE' @00Pis33) prior to July 4, 1776 in the 12 South Saros Series with its theme of 'successful outcomes to long-term worries or illness' (Brady). So even though Mercury Rx may change its mind a few times before voting on Super Tuesday, perhaps as an eclipse activator, changeable Mercury will bring successful outcomes. Of course, the planet's retrograde condition may also indicate election interference by saboteurs and other bad actors which cause delays and uncertain election results as we've already seen ("already seen" = Mercury Rx!). Plus, untested apps may play their parts as well as other 'glitches'.

Then of course thinking Mercury in confused, secretive Pisces denotes a cosmic picture of a difficult voting situation full of disorganization, a lack of clear thinking, and deception. Hopefully not, yet such conditions may be worsened by the fact that America's 12 South PE's Mercury @18Pisces will be transited by fraudulent Neptune on March 3, 2020. However, at the Full Moon of March 9, 2020, Mercury turns Direct @28AQ12 conjunct US natal Moon (We The People) suggesting a period when members of the public tend to identify with those who share their thoughts. And they'll most likely vote for the progressive ideas (AQ) they promote.

So the Full Moon (a 'Super Moon') on March 9, 2020 clocks in @19Vir37 and may supply the public discourse with discussions of Virgoan health concerns (exs: corona virus, CDC funding cuts and/or restoration, GOP repeals of Obamacare provisions, etc) This Full Moon is the culminating 'bookend' of the February 23, 2020 New Moon @4Pis29 across the Virgo-Pisces victim-savior axis.

Then comes the March 24, 2020 New Moon @4Ari12 which culminates with the April 7, 2020 Full Moon, another 'Super Moon', @18Lib43. This Full Moon is depicted, below, for it shines its bright, revealing rays upon the natal 2nd house Jupiter (Stationary, turning Direct) of Donald Trump. Will more of his financial secrets, taxes and crimes, be revealed? Well, in addition, the Sun-Moon opposition squares both wealthy Jupiter and hidden wealth Pluto and you'll find a few of the T-Square's midpoint potentials penned on the chart (please enlarge!), upper center. 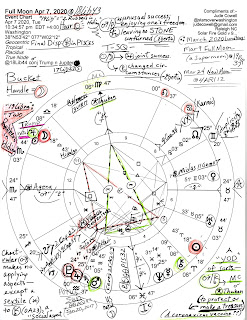 Now the final lunation in April 2020 is the New Moon of April 23 @3Tau24, the degree of the Discovery of Chiron (3Tau08), the Wounded Healer centaur. To me, a Moon-Chiron contact suggests that a perceptual shield is wide open for those who value its cosmic insights and benefits!