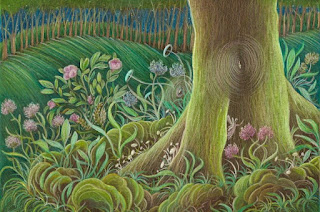 February 13, 2020: If you've watched Revealing Light Tarot's reading covering the Next 6 Months you've noticed Mary Ann's focus on the month of March which naturally contains Spring Equinox 2020 (March 19 11:49 pm ET), a horoscope that serves for the entire year and marks the moment when the Sun conjuncts the Aries Point of World Events. And if you use the late afternoon US natal chart of July 4, 1776 that I tend most to use, this times the Sun's entrance into America's natal 4th house of Domestic Scene and Homeland (with its 4/10 Security implications). The following post is my attempt at an additional consideration of Spring Equinox 2020 (the horoscope set for Washington DC) and the emphasis created by the chart's 2nd hou$e planetary pairs opposing the corporate 8th hou$e. Obviously, we must keep in mind other matters of the 8th house which include death, transition, the occult, shared resources, taxes, debt and credit, and/or insurance.

Mars as 2nd-house Trigger conjuncts Jupiter, then Pluto, then Saturn

In the Spring Equinox 2020 Horoscope (chart shown) we find a full 2nd house (National Treasury; Values; Earning Ability) suggesting a heavy focus on financial matters, if not economic, budgetary, and/or currency concerns. So let's consider the planetary pairs therein for more information in the Realms of Politics and Business as provided by Michael Munkasey and the Hegelian model (creating problems then 'solving' them the way that was already intended).

2nd cusp 25Sag19 makes money bags Jupiter the 2nd-house ruler; Jupiter also rules 4th house with its cusp @6Pis46 along with the 'help' of deceptive loss-leader Neptune, planet of fraud and mergers. Transit Jupiter first conjoins Pluto (1A54) suggesting The Fed, then Saturn (7A040) pointing toward a new social, political, and economic order (see the Jupiter-Saturn link, below). Placements in 2nd house include the drain of the Moon's South Node, the tail of the dragon, suggesting a neurotic reliance on past tactics that are no longer effective, and most folks agree that Trump has certainly plopped our National Treasury resources into the red, in large part due to his Tax Cuts for the wealthy (Corporate Socialism for the 1%!). That the Cancer-Capricorn polarity is intercepted across the 2/8 axis in the Spring Equinox 2020 chart denotes karmic conditions which must be addressed via its Moon-Saturn influences of ambition, strategy, and direction. Saturn-ruled Capricorn's involvement implies investments and Wall Street trading with depressive Moon-Saturn vibes. However, taking direct action to solve problems can always mitigate this.

Meanwhile, with 24Scorpio46 rising, 2nd-house Mars is chart-ruler (and activating trigger), plus, the warrior planet also rules the 5th house of Speculation and Risk-Taking (5th cusp 8Ari17). And with Mars @22Cap35, the January 12, 2020 Saturn-Pluto Conjunction @22Cap46 is thereby activated suggesting potentials for: ruthlessness, violence, and/or 'the necessity to fight for existence' (Ebertin). Munkasey adds 'the need to use whatever means or power available to continue working' and as we know, royalist Trump keeps claiming for himself expansive powers that break the parameters placed in the US Constitution = unconstitutional behavior of the Executive Branch morphing the US government into an imperial monarchy.

Plus, a nod should be made toward the 6th house of Work and Service (Civil, Military, Police, etc), and Health which contains disruptive Uranus @4Tau32 (in Taurus = seeking unusual sources of funding; environmental concerns) and money planet Venus @15Tau56 (conservative in Taurus yet luxury-loving). Together the Venus-Uranus pair relates to money matters such as extravagant spending, waste, eventual bankruptcy, plus, estrangement and relationship break-ups.

So here are some of the potentials of the planetary pairs posited in the 2nd-house with a few comments and a steel industry link included by yours truly:

Mars-Jupiter Thesis: action taken in response to legal judgments (Barr shortening Roger Stone's sentence?); advice which angers or inflames others (ditto); too much legal activity or opinions; religious activities. Anti-thesis: judgment of enemies or those who seek to do battles; misuse of forces; an expansion of military hardware (and funding); legal opinions or judicial cases which affect the military or metal industries.

Mars-Pluto Thesis: security forces allied with the military; conducting clandestine operations; using police or military against criminal elements (oh could we?); attacks using powerful forces and weaponry. Anti-thesis: A police state with rigid military controls; use of suppression and torture as a means of enforcing policy (Trump's dream?); exporting upheaval and political theory to others as an objective; wars, rape, mayhem, chaos.

Mars-Saturn (with Saturn strong in Capricorn at a critical-crisis 29th degree) Thesis: curtailing force or military power by authorities; enforcement of honor through the use of strife or struggle; wars which persist (yep); frustration imposed upon or by criminal elements (Alert: mob boss in the White House!); demands to halt armaments. Anti-thesis: military actions which continue under political or other restrictions; an obligation to use force (NATO?) when restraint is required; the ambitious taking of what belongs to another; an older enterprise becomes angered.

And if we add health to the planetary pictures in consideration of our concerns over Trump's obese medical condition, bad diet, and what looks to be his continual drug use (sniff sniff!), we find that Mars-Jupiter = hip or liver surgery or a major operation, Mars-Pluto = tumors and/or toxic diseases of the sexual organs (late-stage syphilis?), and Mars-Saturn = high blood pressure, blockages (how could a fatty grub not have these?), weak or withered muscles, and/or hyper followed by hypo (Munkasey).

Biologically, to Mars-Jupiter Ebertin adds 'heart muscle' and 'activity of the organs'; to Mars-Pluto: replacement by 'artificial organs and functions' (including dentures); to Mars-Saturn: 'joints, muscles, bones, tendons, sinews, bone or bone marrow inflammation; atrophy of an organ, and/or muscle paralysis, particularly of the breathing mechanism (includes suffocation)'.

(An additional astro-note: today, February 13, 2020, marks the first of three exact oppositions from transit Pluto to Trump's natal Saturn in clannish Cancer and these challenging energies imprint upon the whole of 2020 for him, and thus for our nation (exact again on July 12th and December 20th). Aptly, Trump's abuse of power issues are front and center in the news this very day via his Roger Stone sentencing interference, as you know, along with rigid demands concerning his authority, accountability, and unreliability, demands which are always required by cosmic taskmaster Saturn - his, spotlighted all through 2020 by oppositions from powerful Pluto, planet of manipulation, control, secrets, criminality, and hidden wealth.)

Well, this post is my second pass at the Spring Equinox 2020 Horoscope (aka, Aries Ingress) using a different lens than before. And as always your on-topic comments are welcome (moderated to cull out the ads and trolls!) and my Thanks for any and all Shares which encourage more such SO'W posts! jc

Related 2020 posts include: DC Horoscopes: Jupiter-Pluto Conjunctions of 2020 (tri-wheel charts shown), and the order-shifting Jupiter-Saturn Conjunction which ends 2020 on December 21st @00AQ29 - here are the conjunction's Midpoint Pictures and its DC Horoscope.

Sources: Unleashing the Power of the Planets, Michael Munkasey, and The Combination of Stellar Influences, Reinhold Ebertin.

Above image: 'Abandoned Garden with Peonies', a pencil drawing by yours truly.