June 21, 2020: From his Wikipedia bio we find that former attorney for the Southern District of New York (SDNY) Geoffrey Berman was born on September 12, 1959 in Trenton, New Jersey. Currently top of the news, Mr. Berman has now stepped down from his SDNY position after a brief stand-off between him and Trump's 'AG' Bill Barr who, acting under orders of Trump (my assessment), was originally fired-by-press-release in a 'Friday Night Massacre' event (June 19, 2020).

As you know, Mr. Berman's ouster is an obvious attempt to stop ongoing SDNY investigations into Trump and various of his dealings (exs: Campaign 2016, irregular banking - exs: Deutsche Bank loans and Turkish bank Halkbank indicted in 2019 on money laundering charges) - Russian and other money laundering offenses (perhaps China? a Middle Eastern nation or two), etc, etc.). Plus, the Barr-Trump power play is an attempt to cover up the activities of Rudy Guiliani, and to stop the Jeffrey Epstein pedophile/sex trafficking investigation/s. And since Trump and Barr are allegedly linked to the latter, of course they're ansty to hide any damning evidence of their perversions (if any) that could be shown by ongoing SDNY investigations.

However, perhaps Mr. Berman will speak out on various topics of great interest to the American public even if anti-Trump investigations are stymied by his and Barr's strong-armed power moves against him (so I'm adding Mr. Berman's natal planets to the June 24, 2020 horoscope along with its significant 2020 contacts to Barr's natal planets, as you see, below.

Note that this is a speculative horoscope set for June 24, 2020 10:00 am edt Capitol Building Washington DC when the House may hold a hearing and Rep. Nadler may call certain whistleblowers or others to testify. Therefore, I've titled the chart based on its potential to become a "Whistle Blower Day" and am interested in readers' on-topic comments concerning this horoscope and its contacts to Berman's and/or Barr's natal planets, if you please: 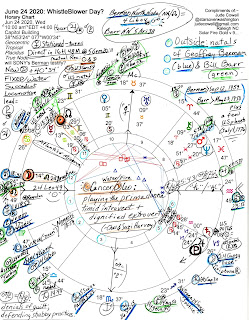 Outer: Geoffrey Berman blue; Bill Barr green; a few USA planets are penned around the center chart but are not color coded. Trump's first natal planet to rise is his pesky Mars @26Leo. Berman's is Venus Rx @1Vir53 although his natal Uranus @18Leo42 has already risen into the 12th house of Politics, Karma and Large Institutions (such as the US Congress). Mr. Berman's already-occurred separation from SDNY is indicated by Uranus and Venus Rx.

Barr's first natal planet to rise at 10:00 am edt is 'legal eagle' Saturn @12Vir38 but his natal Pluto and Moon (his Luna probably in Leo) have just risen into the 12th house. The Moon-Pluto duo tends toward secrets being revealed and/or scandals along with deep emotions - probably rage, plus, personal insults and offended vanity or conceit (Ebertin).

Actually, Bill Barr is most likely the primary reason for the hearing (if it occurs) for you see the pile-up at Midheaven (MC: The Why? Point) of his Sun-conjunct-Nemesis, Mercury Rx, Midas, and his political Uranus-NN midpoint suggesting potentials for criticism, impetuous goals, and his fanatic promotion of anarchistic ideas and ideals. With his Uranus-NN at Midheaven his zealous views are brought into a public forum and hints that Barr has received assurances from someone 'higher up' that his ideas and ideals will be well received and that his and Trump's teamwork will pay big dividends in the long run if not the short.

Just a quick look at the natal charts of Berman and Barr makes this entire weekend's events make more sense.

Berman and his 6 earth planets give him that down to earth, honest, reliable quality so treasured in a public official. Venus conjunct Pluto in Virgo, trine Saturn in Capricorn, say to me that he has a deep love of the law, and a careful responsible approach to life and death decisions he is tasked to make in his professional life. He is LOGICAL above all. With Mars conjunct Saturn in his life, he has energy for structures, and Moon in Capricorn gives him pleasure in defense of structures.

Barr, on the other hand, is a hot Gemini mess. Even with his Sun at one degree Gemini and the Sabian symbol "a glass bottomed boat in still water" he squanders his abilities of deep contemplation and vision with EGO! This defect being represented by his Pluto conjunct Moon in the very bright and shiny sign of Leo. Always ready for a party, Barr's LIAR LIAR, PANTS ON FIRE relationship with the truth, is revealed in his unfortunate Venus opposition Neptune placement across the Aires/Libra axis. If it wasn't for his Sun square Jupiter, and the reaching big it produces, he could have been ignored as the egotistical ping pong ball that he is. Barr is EMOTIONAL and impulsive, a real problem in the state of our world today.

Between these two men, I'll take reliable Berman over the very EMOTIONAL Barr. The fact that Barr's impulsive and ham-handed firing of Berman backfired so spectacularly is no surprise, given that Berman's goal is the pursuit of JUSTICE vs Barr's goal being the pursuit of EGO. Justice wins. The very able lawyer now in Berman's position will ensure the SDNY will continue the investigation of all the bad guys who have run roughshod over our laws and rules.