June 19, 2020 Horoscope of a Significant Toppling 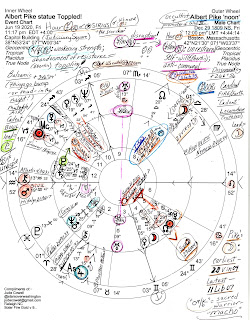 Bi-Wheel: center Pike Statue Toppled with Albert Pike's natal (noon) horoscope around the outside. Sorry for my messy scribbles!

Notable is that the same midpoint picture turns up in both the 2020 toppling horoscope and 'grand poobah' Pike's 1809 natal chart: Neptune-NN = Uranus with 2020 Uranus opposing his natal Uranus in Scorpio (kind of a midlife crisis for him if he only knew). For us, chaos, disruption, and separation are activated potentials of this transit, plus, 2020 Uranus in Taurus opposes Inauguration 2017's Moon (9Scorpio) suggesting current events not only of civil unrest, protests, topplings of Confederate statues, and general upheaval as it shouts-out The Confederacy with its separative/secessionist sympathies, plus, the 'great' poobah himself, Donald Trump.

Related: The Statue That Binds White Supremacy, World War II, Trump, and the US Congress (posted October 10, 2017 when Senator Bob Corker was still in Congress). I only wish that toppling said statue was all it takes to rid America of the criminal saboteurs and Utopian zealots now infesting it.

An Also-Related Post: Horoscope of The Confederacy: "a Dark Vein of Intolerance".